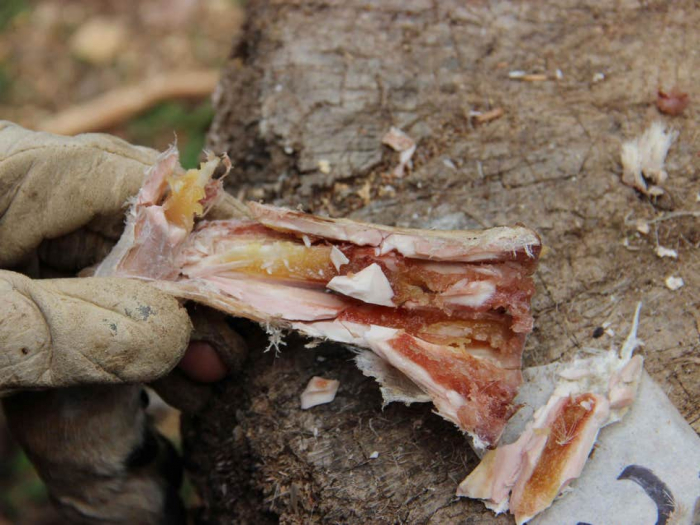 Prehistoric humans stored bone marrow in their caves like tins of soup for up to nine weeks before eating it, a new study has found.

Previously, scientists thought Paleolithic people lived a hand-to-mouth existence but this research shows they were sophisticated enough to preserve meat using bones like we use modern-day cans.

The study shows this was happening between 420,000 and 200,000 years ago in Qesem cave near what is now Tel Aviv. It is the earliest evidence of delayed consumption of food in the world, according to the study published in Science Advances.

“The bones were used as ‘cans’ that preserved the bone marrow for a long period until it was time to take off the dry skin, shatter the bone and eat the marrow,” said Professor Ran Barkai from Tel Aviv University, who was involved in the research.

“Bone marrow constitutes a significant source of nutrition and as such was long featured in the prehistoric diet.

“Until now, evidence has pointed to the immediate consumption of marrow following the procurement and removal of soft tissues. In our paper, we present evidence of storage and delayed consumption of bone marrow at Qesem Cave.”

Inhabitants of the cave brought in selected body parts of hunted animal carcasses.

“The most common prey was fallow deer, and limbs and skulls were brought to the cave while the rest of the carcass was stripped of meat and fat at the hunting scene and left there,” said Professor Jordi Rosell from the Catalan Institute of Human Paleoecology and Social Evolution (IPHES).

Researchers found deer leg bones had specific chopping marks on them which do not look like marks left from stripping fresh skin.

They believe the bones were left covered in skin to help preserve them until they needed the meat.

“We assume that all this was because elephants, previously a major source of food for humans, were no longer available, so the prehistoric humans in our region had to develop and invent new ways of living,” said Professor Barkai.

“This kind of behaviour allowed humans to evolve and enter into a far more sophisticated kind of socioeconomic existence.”

The cave was discovered 15 years ago during the construction of a road to Tel Aviv.

A 2010 study into the traces caused controversy in the archaeology world as it questioned the theory of Homo sapiens originating in Africa, but the archaeologists were unable to draw a concrete conclusion from the evidence.