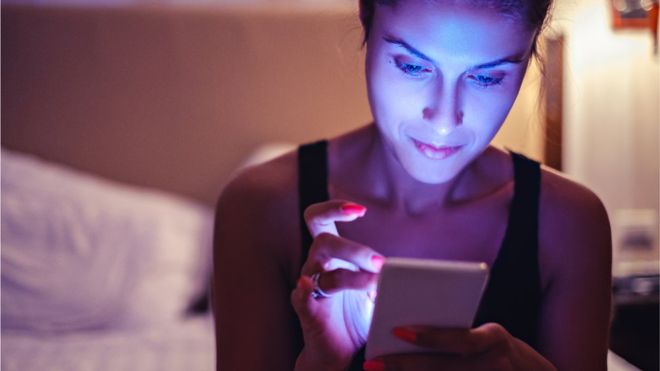 The idea artificial light from screens is keeping people awake at night is flawed, say scientists who have been studying the best type of lighting to nod off to.

According to the researchers, from Manchester University, this blue light from devices is not the main problem.

They exposed mice to different light settings to study the impact.

The controversial findings, in Current Biology journal, suggest the answer lies in how warm and bright a light is.

Why do the study?

Everyone has a natural, daily wake-sleep cycle.

Their body clock synchronises with the environment so they are alert in the daytime and sleepy at night.

But experts have long suspected exposure to artificial light might be upsetting this alignment.

And there is a popular view artificial blue light - the type that comes from computer screens and mobile phones - has a particularly strong effect.

What did it find?

The team did tests on mice, fixing the brightness to high or low and switching the colour from blue to yellow.

Bright light of either colour was stimulating, rather than restful, as expected.

But when the light was dimmed, blue light was more restful than yellow light.

"During the daytime, the light that reaches us is relatively white or yellow and has a strong effect on the body clock and around twilight, once the Sun sets, the bluer the light becomes," he said.

"So if you want to avoid light having a strong effect on your body clock, dim and blue would be the way to go."

Conversely, bright white or yellow light was better for staying awake and alert.

What does that mean?

Night-mode settings for phones and laptops reduce blue light in an attempt to lessen the damage to sleep.

"At the moment, often what people are doing is adjusting the colour of lighting or visual displays and making the screens more yellow," Dr Brown said.

"Our prediction is that changing the colour is having exactly the wrong effect.

"It's counteracting any benefit that you might get from also reducing the brightness of the screen."

But the researchers say the basic way light affects the body clock is the same across all mammals, including humans, meaning the findings should apply to people.

They recommend more research to confirm it.

Dr Manuel Spitschan, from Oxford University, said: "This is fascinating work but we really don't know yet that the same happens in humans. That's the difficulty with animal work.

"It should be possible to do tests with people in the future to find out for sure."