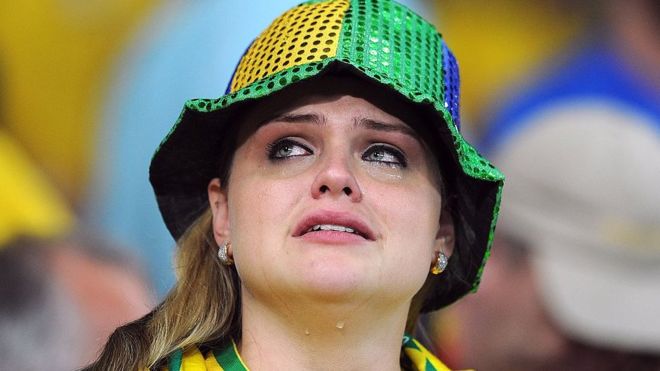 Devoted football fans experience such intense levels of physical stress while watching their team they could be putting themselves at risk of a heart attack, research suggests.

The Oxford study tested saliva from Brazilian fans during their historic loss to Germany at the 2014 World Cup.

It found levels of the hormone cortisol rocketed during the 7-1 home defeat in the semi-final.

This can be dangerous, increasing blood pressure and strain on the heart.

The researchers found no difference in stress levels between men and women during the game, despite preconceptions men are more "bonded to their football teams".

Impending doom
"Fans who are strongly fused with their team - that is, have a strong sense of being 'one' with their team - experience the greatest physiological stress response when watching a match," said Dr Martha Newson, researcher at the Centre for the Study of Social Cohesion, at Oxford.

"Fans who are more casual supporters also experience stress but not so extremely."

Prolonged high levels of cortisol can:

Raised cortisol can also give people a feeling of impending doom, that their life is in danger or they are under attack.

Previous research has shown an increase in heart attacks among fans on important match days, whether supporting club or country.

In their study, the University of Oxford researchers tracked cortisol levels in 40 fans' saliva before, during and after three World Cup matches.

The most stressful by far was the semi-final.

"It was a harrowing match - so many people stormed out sobbing," Dr Newson told BBC News.

But the fans had used coping strategies such as humour and hugging to reduce their stress, bringing it down to pre-match levels by the final whistle.

"Clubs may be able to offer heart screenings or other health measures to highly committed fans who are at the greatest risk of experiencing increased stress during the game," she added.