If you want your kid to eat healthier, let them watch certain cooking shows 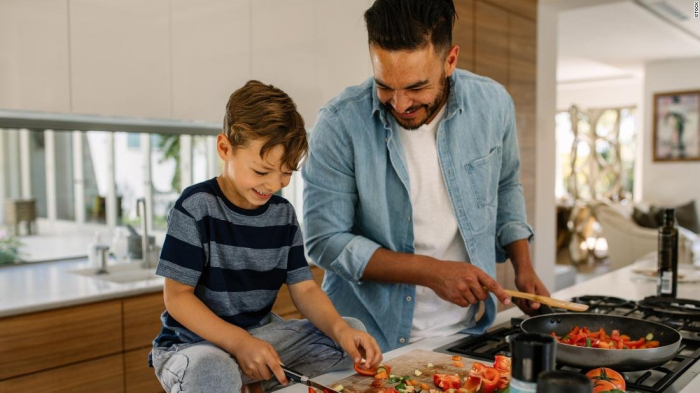 If you want your kids to make healthier food choices, have them watch more television -- certain cooking shows, anyway.

"If you promote healthy foods to children, it can be beneficial to improve their intake," said Dr. Frans Folkvord, lead author of the study and assistant professor at the School of Humanities and Digital Science at Tilburg University in the Netherlands.

"For parents, it's important that they promote healthy foods during day time by different methods, and one of the methods is these cooking programs."

Researchers asked 125 children between the ages of 10 and 12 to watch 10 minutes of a Dutch TV show designed for children. Some watched a clip featuring healthy foods, while others watched a video featuring less healthy, energy-dense foods.

To ensure the children's perception of the foods was how the authors intended, children in each group were asked to indicate on a 10-point scale how healthy they perceived the foods shown in the cooking program, ranging from zero (very unhealthy) to 10 (very healthy).

The healthy foods clip featured tomatoes, onions, brussels sprouts and other fruits and vegetables. The clip that centered on unhealthy foods showed hamburgers, French fries with mayonnaise and croissants.

The videos depicted contestants from Dutch schools battling each other in the kitchen by cooking dishes themselves, tasting it and having to answer questions about the ingredients they thought were needed to make them.

As a reward for participating in the study, the kids were offered a snack, which they could choose from a set of options.

Cooking shows can have positive effects on behaviors and attitudes by promoting togetherness and healthy perceptions of food, the authors said.

Cooking with someone is often an essential part of such shows. Additionally, visual food cues on the shows model healthy foods and portions.

According to cue reactivity theory, which holds that people can develop learned responses by being presented with certain stimuli or cues, such food cues trigger food cravings for the food that's shown and subsequently lead to the actual eating behavior.

There are several kid-friendly cooking shows your child can watch to learn more about food.
Good Eats, a US program featuring TV personality Alton Brown, explores the science and technique behind cooking familiar dishes that can be made at home, the history of different foods and the advantages of using varying cooking equipment.

Kids Baking Championship is a reality baking program that involves children competing to make the best baked good, then being judged on presentation, taste and creativity.

America's Test Kitchen, which airs in the US and Canada, features a handful of test cooks working in a real test kitchen. They prepare recipes as they discuss what works, what doesn't and why, highlighting how important recipe testing is to cooking and what to look for when buying ingredients.

If you don't have a cable or streaming option, there are various YouTube channels geared toward helping kids learn to enjoy cooking, with videos focused on anything from homemade pizza to ice pops made with real fruit.

How else to encourage your kids to make healthier food choices

Children tend to develop more positive and responsible attitudes toward healthy food as they age, but there are things you can do as a parent to foster that process, like cooking with them and using positive language around food.

Research has shown that when youth are involved in preparing healthy foods, such as vegetables or salads, they're more likely to consume nutrient-rich foods, have higher intakes of key nutrients and lower intakes of sugary or fatty foods, than when they aren't involved in the process.

"Children model the behavior of their parents, so they see what their parents are cooking, what they're eating and also how they're preparing the foods. So, this is a conscious way of influencing the children," Folkvord said.

The effect of exposure to healthy foods on children's eating behavior is also influenced by their personality traits, which can be a barrier to their responsiveness to healthy eating messages.

Some kids are phobic of certain foods or of trying new ones. This can be overcome by encouraging them enough to try them again, or in different ways. Having children try a novel food in rotation over the course of several days can help them open up to any unfamiliar flavors and textures.

Dr. Maya Adam, the director of health education outreach at Stanford University's Center for Health Education, said that to engage children in a fruitful dialogue about food, the conversation needs to be celebratory rather than prescriptive or restrictive.

In this way, children learn to think of food as an addition of value to their lives. Adam is a fan of the French way of teaching children about nutrition in schools, known as the "education of the palate." It enlightens them about a variety of quality foods and empowers them to make their own choices.

Communicating to children early on that they should select foods that are worthy of them can also help them make beneficial dietary choices.

"Tell them we see how special you are with your gifts, talents and hard work, and those deserve to be sustained with the best nutrition possible," Adam said.

Studies have shown that dietary intake patterns of young people do not meet international dietary standards. This can have negative effects on several health and wellness indicators, such as maintenance of healthy weight, growth and development patterns and dental health.

But by nurturing your child with knowledge about healthy food habits and behaviors, you can help them pave the way to good health and well being in their adult life.