We're worse with food waste than we think 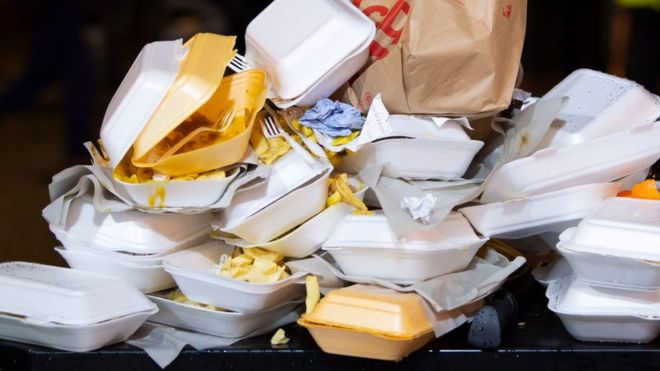 Common estimates for global food waste are too low, according to Dutch researchers, who suggest every person in the world is wasting about 500 calories of food a day.

Without waste, we could feed five people instead of four, they said.

The study found food waste goes up with the increase of money in our pockets, possibly reaching more than twice the levels we thought previously.

Wasted and lost food accounts for almost 10% of all our greenhouse gas emissions, according to the UN.

Stopping food waste is a win for consumers and it's definitely a win for the planet, said Dr Monika van den Bos Verma of Wageningen University in The Netherlands.

"Throwing food out in your dustbin is like throwing a five euro note out - why would you do that?"

Previous estimates have put global food waste at 214 calories per day per person (214 kilocalories/day/capita - a kilocalorie is another word for what's commonly called a calorie).

The researchers looked in detail at the issue of food waste, using data from the FAO, World Bank and World Health Organization (WHO).

Food waste started to rise above a daily income of about seven dollars per day.

And while the FAO estimated food waste to be 214 calories per day per person in the world in 2015, their model for the same year gave a figure of 527 calories.

Food waste is more of a problem in richer countries than we think but it's also going to rise faster in poorer countries, he added.

"From what we currently have in our kitchens we could feed five persons instead of four if we don't waste," he said.

They say behavioural change is important, such as encouraging shoppers to switch from buying in excess or hoarding to buying "enough", with the thought that you can always buy more. And food must be valued and appreciated more in society.

The research, published in the journal, Plos One, did not include food lost in the production process before it gets to the consumer. The widely quoted figure of one third of all food available for human consumption lost or wasted is made up of both food lost before it reaches the consumer, which the study did not look at, and food wasted once it arrives in the kitchen.

The figures are global and give a basis for measuring progress towards the international goal to reduce food waste by half between 2015 and 2030.

"It's essentially the most sustainable way to solve part the problem of how to feed the world in the future," said co-researcher, Dr Martine Rutten.