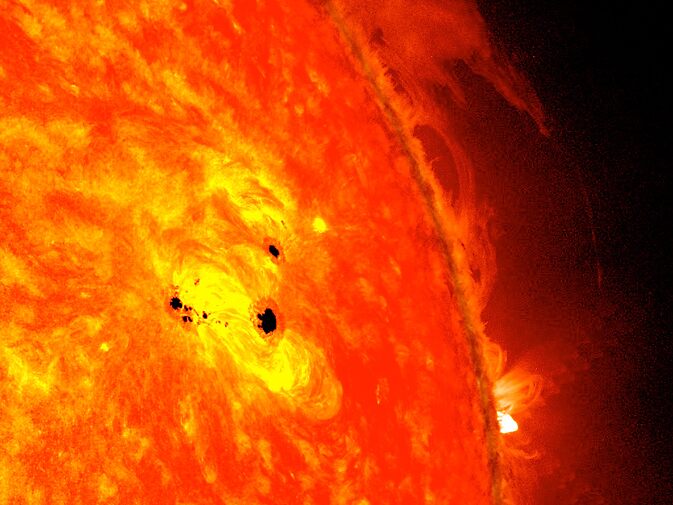 The sun has entered an unusually quiet period, with the number of sunspots appearing on the surface unusually low. This level of activity is so low, some scientists have suggested we may be entering a "deep" solar minimum, and potentially even a Grand Minimum—the last of which took place in the 17th century and coincided with a mini ice age.

In April last year, scientists at the National Oceanic and Atmospheric Administration predicted the forthcoming solar minimum would be similar to the last cycle. In a statement, Lisa Upton, Ph.D., a solar physicist with Space Systems Research Corp, said the next solar cycle would be much like the last, with a weak maximum and a "long, deep minimum." However, she also said there was "no indication" we are approaching a solar minimum in line with the last Grand Minimum—known as the Maunder Minimum.

So far this year, there have been 104 days where no sunspots have appeared on the sun's surface, according to SpaceWeather.com. Across the whole of 2019, there were 281 sunspot-free days. As the website notes, the lack of activity on the sun suggests the solar minimum is taking place. "So far this year, the sun has been blank 76 per cent of the time, a rate surpassed only once before in the Space Age," it said. "Last year, 2019, the sun was blank 77 per cent of the time. Two consecutive years of record-setting spotlessness adds up to a very deep Solar Minimum, indeed."

Mathew Owens, Professor of Space Physics at the University of Reading, U.K., told Newsweek that entering a solar minimum is not unusual, but the level of activity currently taking place is out of the ordinary. "The Sun has been 'spotless' for a large fraction of the last year, which is indeed quieter than is typical," he said in an email. "It's still a little early to say where it fits relative to other minima we've seen. If it does continue in this fashion, it may well rank up there with the longer minima on record. But at present it is not unprecedented; in fact, the very previous solar minimum [2009-2010] was longer."

The Maunder Minimum was the period between 1650 to 1715 when solar activity was extremely low. It is sometimes associated with a period of global cooling, where the global temperature was around one degree Celsius cooler than it was at the start of the Industrial Revolution.

Solar minimums in the sun's normal cycle have little to no effect on Earth's temperature, with energy output from the Sun only dropping by around 0.1 per cent.

Joanna Haigh, the author of The Sun's Influence on Climate, who recently retired from the Department of Physics at Imperial College London, said that beneath the sun's normal 11-year cycle is "a longer-term variation in solar activity when the sun goes between Grand Maxima and Grand Minima." This, she said, could be called a deep minimum. "The sun has been declining in overall activity recently, the number of days with zero sunspots is well above average, and some solar physicists have predicted that the sun is heading for another Grand Minimum," she told Newsweek in an email.

"The Earth's surface temperature during the Maunder Minimum was probably about 1 degree Celsius colder than the 19th century (before human-induced global warming kicked off) and that period is sometimes called The Little Ice Age. However, it is difficult to ascribe all that cooling to the Sun because it just so happened that there were quite a few big volcanic eruptions during that period and they also have a cooling effect."

Haigh said in terms of global temperatures, the solar minimum is little to worry about. If anything, it could help slightly mitigate current anthropogenic warming. This effect will dissipate when activity on the sun picks up again, however.

Owens said he expects the sun's quiet period to come to an end in the near future: "Based on past solar cycles, I'd expect activity to pick up very soon, in the coming few months. But the Sun can always surprise us."