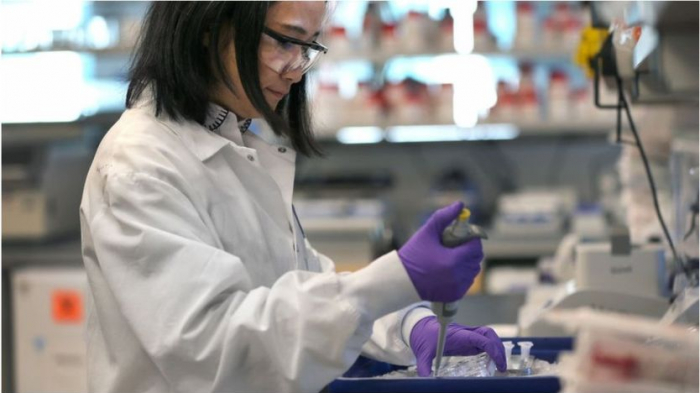 The first hints that a vaccine can train people's immune system to fight coronavirus have been reported by a company in the US.

Moderna said neutralising antibodies were found in the first eight people who took part in their safety trials.

It also said the immune response was similar to people infected with the actual virus.

Larger trials to see whether the jab actually protects against infection are expected to start in July.

Work on a coronavirus vaccine has been taking place at unprecedented speed, with around 80 groups around the world working on them.

Moderna was the first to test an experimental vaccine, called mRNA-1273, in people.

The vaccine is a small snippet of the coronavirus's genetic code, which is injected into the patient.

It is not capable of causing an infection or the symptoms of Covid-19, but is enough to provoke a response from the immune system.

The vaccine trials, run by the US government's National Institute of Allergy and Infectious Diseases, showed the vaccine led to the production of antibodies which can neutralise the coronavirus.

However, testing for these neutralising antibodies has only taken place on the first eight, out of 45, people on the trial.

The people on the trial were taking either a low, middle or high dose. The highest dose was linked to most side-effects.

However, Moderna said that even people taking the lowest dose had antibodies at the same levels seen in patients who recover from Covid-19.

And antibodies "significantly exceeded" those in recovered patients for people on the middle dose.

The study is known as a phase 1 trial as it is designed to test whether the vaccine is safe, rather than whether it is effective.

It will take larger trials to see if people are protected against the virus. However, experiments on mice showed the vaccine could prevent the virus replicating in their lungs.

"These data substantiate our belief that mRNA-1273 has the potential to prevent Covid-19 disease and advance our ability to select a dose for pivotal trials."

Moderna said it was hoping to start a large-scale trial in July, and that it was already investigating how to manufacture the vaccine at scale.

A vaccine pioneered by the University of Oxford is also being tested in people, but there are no results from those trials yet.

However, concerns have been raised about the results of experiments in monkeys.

Tests showed vaccinated animals had less severe symptoms and did not get pneumonia. However, they were not completely protected from the virus and signs of it were detected at the same level in the monkeys' noses as in unvaccinated animals.

Prof Eleanor Riley, from the University of Edinburgh, said: "If similar results were obtained in humans, the vaccine would likely provide partial protection against disease in the vaccine recipient but would be unlikely to reduce transmission in the wider community."

However, until human trials have been performed it is impossible to know how the vaccine will perform in people.