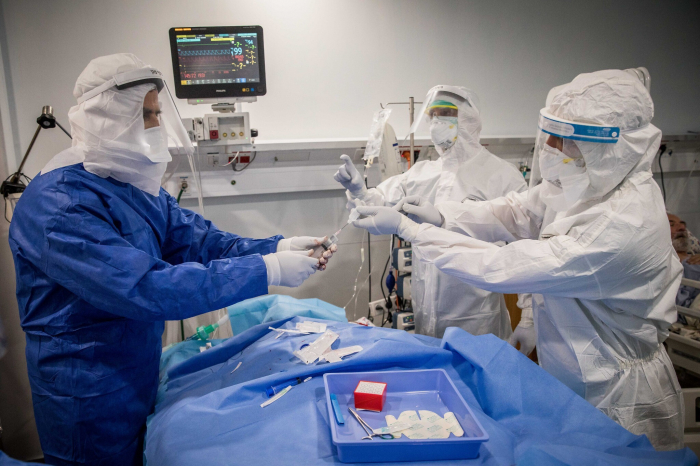 A South Dakota company expects to start human trials next month for a Covid-19 antibody treatment derived from the plasma of cows, AzVision.az reports citing CNN.

But these aren't just any cows. Scientists genetically engineered the animals to give them an immune system that's part human. That way, the animals produce disease-fighting human antibodies to Covid-19, which are then turned into a drug to attack the virus.

"These animals are producing neutralizing antibodies that kill [the novel coronavirus] in the laboratory," Eddie Sullivan, CEO of SAB Biotherapeutics said in a statement to CNN. "We are eager to advance to the clinic as we move forward in the regulatory process with the hopes of bringing this potential COVID-19 therapeutic to patients in need of a solution."

The company did not say how many people would be studied in the clinical trials or how long they would take.

To make its drug, SAB took skin cells from a cow and knocked out the genes that are responsible for creating cow antibodies, and instead inserted an engineered artificial human chromosome that produces human antibodies.

They put the DNA from those cells into a cow egg and turned it into an embryo. They then implanted that embryo into a cow to start a pregnancy, and over the past two decades, have produced several hundred genetically identical cows, all of them with partly human immune systems.

The scientists then injected some of the cows with a non-infectious part of the virus that causes Covid-19. The cows are now producing human antibodies to the coronavirus. Those antibodies naturally fight off the virus.

SAB has manufactured hundreds of doses of the medicine, called SAB-185, to use in its clinical trials. The company has not yet announced whether it will study the drug as prevention or treatment for Covid-19, or both.

The principle behind the drug is quite old. For more than a century, doctors have given patients suffering from infectious diseases the blood products from patients who've already recovered and produced disease-fighting antibodies. The treatment, called convalescent plasma, is still being used today to treat Covid.

The cows have several advantages over human plasma donors. One, SAB says, is cows naturally have a more robust immune response than humans, and repeated injections with the coronavirus make that response even stronger. Two, cows are large and have more plasma to give. Three, they can give plasma three times a month, instead of once a month, like humans.

According to SAB, their drug made from cow plasma has levels of neutralizing antibodies four times higher than the most potent antibodies in human samples they studied. This research, conducted at the University of Pittsburgh, was shared in a press release by the company, and has not been published or peer reviewed.

Last week, another company, Regeneron Pharmaceuticals, announced it had started human trials with a drug derived from mice.

Regeneron is studying whether the drug will either prevent or treat coronavirus.
"We would hope that by the end of the summer, we might be able to be providing hundreds of thousands of doses to patients in need both for prevention and also for treatment," Yancopoulos told CNN in May.

The genetically engineered mice obviously aren't large. Scientists extract the most powerful human antibodies from the mice and then clone them, theoretically in unlimited amounts.

The company is also working with antibodies from human survivors of Covid-19.

"We pull fully-human antibodies from these 'magic mice,' as well as from human survivors, to maximize our pool and ensure we select the very best therapeutic antibodies for our Covid-19 drug," said company spokesperson Alexandra Bowie.