First ever picture of a multiplanetary system like our own released 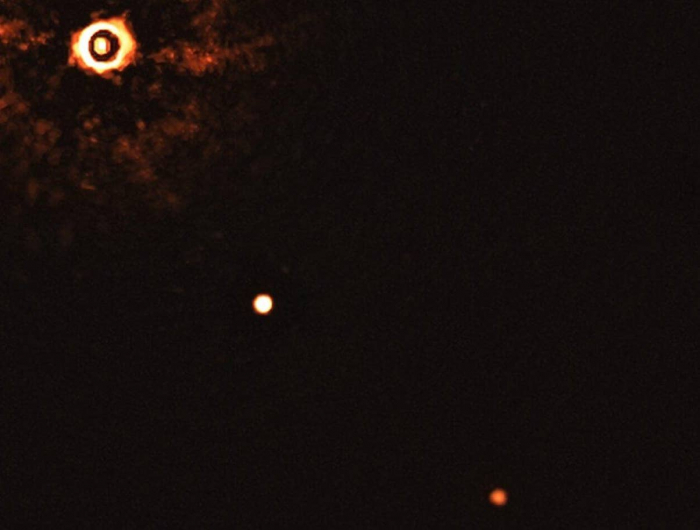 Scientists have released the first ever picture of a solar system like our own – a Sun-like star, orbited by multiple exoplanets, the Independent reported.

It is the first time that astronomers have been able to directly see a planetary system with more than one planet, with more than one world. Images of exoplanets of any kind are incredibly rare, but the new picture represnts a breakthrough in the discovery of other planets like our own.

Researchers hope that in addition to offering the first real look at such a similar planetary system, the image and observations could help us understand how our solar system's planets were formed and went on to evolve around our Sun.

Being able to take such direct observations will also be an important part of the search for planets that can support life, researchers said.

“This discovery is a snapshot of an environment that is very similar to our Solar System, but at a much earlier stage of its evolution,” said Alexander Bohn, a PhD student at Leiden University in the Netherlands who led the new research, in a statement.

The image was taken by the European Southern Observatory's Very Large Telescope. It shows the planetary system known as TYC 8998-760-1, which is about 300 light years away.

Astronomers have already found thousands of other planets in our own galaxy. But almost all of them have been discovered through the "transit" method, where scientists watch for the trademark drop in light that happens as the planets move in front of their star.

Researchers have only ever been able to directly observe two other systems that had more than one planet before. But in both of those cases, the stars were very different from our Sun.

As such, the new image represents humanity's first look at a direct image of star like our Sun, surrounded by more than one planet, as in our solar system.

“Our team has now been able to take the first image of two gas giant companions that are orbiting a young, solar analogue,” says Maddalena Reggiani, a postdoctoral researcher from KU Leuven, Belgium, who was part of the research.

While the star in the system is more similar to our Sun than any other observed in such a way before, it still has important differences. Scientists describe it as a "very young version of our own Sun", since it is only about 17 million years old.

The planets are even more different from our own Earth – they are gas giants, like Jupiter, Saturn, Uranus and Neptune. They orbit at around 160 times and 320 times the distance we are from the Sun, and are much heavier than the planets in our solar system.

Scientists were able to take the images using the European Southern Observatory's SPHERE instrument. That is able to block out bright light from the star, allowing the for more dim planets to be seen – such a technique would not work on the planets of our solar system, since they are older and cooler, but younger planets glow from their heat.

Astronomers hope to conduct further observations of this system to understand the history of the planets. New technology such as that in the upcoming Extremely Large Telescope could allow astronomers to see even more hidden planets, scientists said.

“The possibility that future instruments, such as those available on the ELT, will be able to detect even lower-mass planets around this star marks an important milestone in understanding multi-planet systems, with potential implications for the history of our own Solar System," Mr Bohn said.