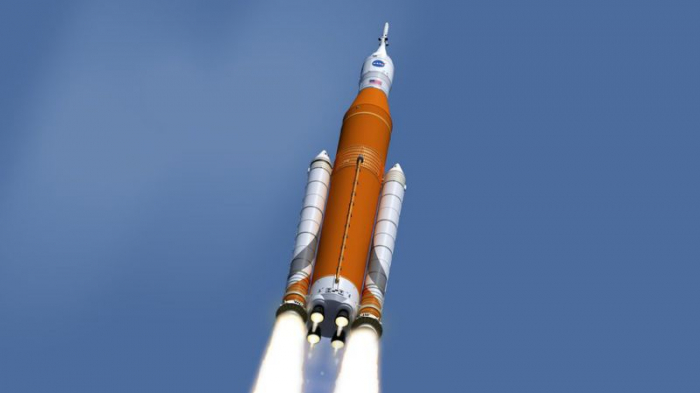 Engineers have fired a kind of booster rocket that will help send Americans back to the Moon in 2024.

At 20:05 BST the booster, which was secured to the ground, expelled an immense column of flame for two minutes.

Two of these boosters will form part of Nasa's massive Space Launch System (SLS) rocket, the biggest launcher built since the Saturn V in the 1960s.

Wednesday's rocket firing was carried out at a test site in Promontory, Utah.

The facility is operated by aerospace giant Northrop Grumman.

The huge Solid Rocket Boosters (SRBs) provide most of the thrust in the first two minutes of the SLS's ride to space.

The test was designed to test the performance and manufacturing quality of the booster's rocket motor. It will also help teams evaluate potential new materials, processes, and improvements for the boosters beyond the first landing on the Moon in 2024.

Measuring 54m (177ft) long and 4m (12ft) wide, the SLS booster is the largest and most powerful solid propellant booster ever built. 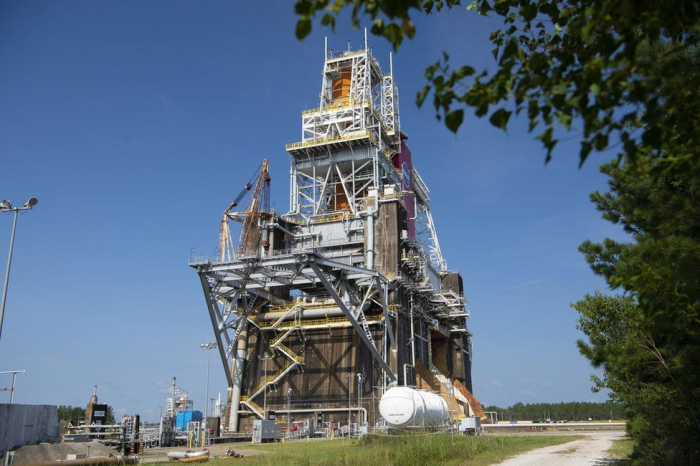 The SLS consists of a huge core stage with four engines at its base. Two SRBs are attached on each side of the core and provide 75% of the thrust during the first two minutes of the ascent to space.

Both the core and boosters are derived from technology used in the space shuttle, which was retired in 2011.

Able to produce a total thrust of more than eight million pounds, the SLS will supply the power necessary to launch crewed missions to the Moon, and eventually - it is hoped - Mars.

Nasa plans to launch the giant rocket on its maiden flight next year. This mission, called Artemis 1, will see an unpiloted Orion capsule sent on a loop around the Moon.

Teams at Nasa's Kennedy Space Center are already assembling the solid rocket boosters for this mission.

For Artemis 2, four astronauts will travel around the Moon in 2023, followed a year later by the first crewed landing since 1972.

Meanwhile, engineers in Mississippi have resumed their "Green Run" testing of the massive SLS core stage, after operations were paused in response to the threat from tropical storms Marco and Laura.

The Green Run consists of eight tests, four of which have been completed since the core stage arrived at Nasa's Stennis Space Center near Bay St Louis in January. The fifth, which has just started, will aim to check out rocket controls and hydraulics.

Nasa's head of human spaceflight Kathy Lueders said she hoped the programme could stay on track for a "hot fire" test in October.

During the hot fire, all four of the powerful RS-25 engines at the base of the core stage are fired for about eight minutes - the time it takes for the SLS to get from the ground to orbit.