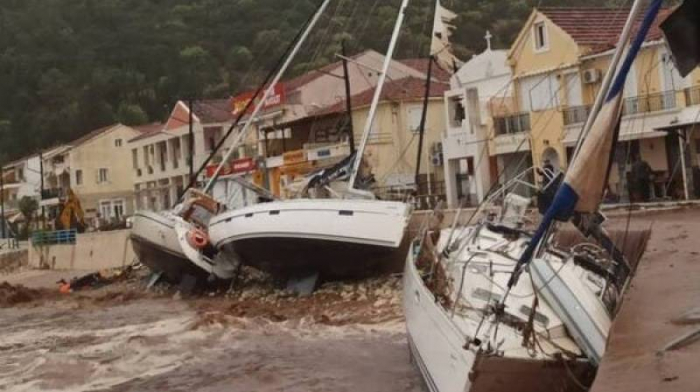 Two people were found dead and another person was missing on Saturday after central Greece was lashed by a rare hurricane-like storm known as a "medicane", AzVision.az reports citing AFP.

Hundreds of people had to be rescued from flooded buildings as heavy rain and high wind wrecked homes, shops and warehouses in regions north of the capital Athens.

Mediterranean cyclone Ianos forced flights and ferries to be cancelled on Friday as it barrelled across Greece's western islands. By Saturday afternoon it was heading south towards Crete but losing strength.

Emergency teams were still searching for a boat carrying 55 migrants on Saturday after receiving a distress signal a day earlier, but the coast guard told AFP the vessel may have changed direction after receiving no help.

The city of Karditsa about 300 kilometres (190 miles) north of Athens was badly hit overnight, with mudslides, falling trees and power cuts.

Local reports said a man was found dead on his farm in the area.

In nearby towns, a woman was found dead in her inundated house and another was missing after her car was swept away by a flooded river, firefighters said.

Prime Minister Kyriakos Mitsotakis expressed his condolences over the deaths and promised that all affected regions would receive support from the state.

Medicanes -- a portmanteau of Mediterranean and hurricane -- are a rare phenomenon only categorised by experts over the past four decades, according to Kostas Lagouvardos, director of research at the Athens Observatory.