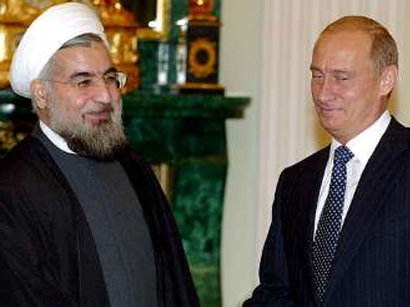 Russia President Vladimir Putin, in a telephone conversation with President Hassan Rohani on Wednesday evening, stressed on his countrys common stance with Iran on prevention of a military attack against Syria, IRNA reported.
According to Presidential Office Website, the two presidents emphasized that illegal military attack against any country is a blatant breach of international laws.

President Rohani said that Iran is keen to consult with Russia on different issues including the problem of Syria.

Praising the principled stance of Russia on Syria, President Rohani said that this stance helps establish peace in Syria.

President Rohani said the Islamic Republic of Iran strongly condemns use of chemical weapons anywhere and by anybody but believes that any pre-judgement on the issue can be dangerous.

Rohani said likely military move of the western countries against Syria is a source of concern, adding that Syria has a sensitive and strategic position and any military attack against it can cause instability all over the Middle East.

Rohani called for all efforts to prevent the military attack and said such an attack can put at risk all the achievements of peace-loving countries.

President Putin said international issues have become very complicated, adding that Russia, like Iran, believes that use of weapons of mass destruction including chemical weapons is unacceptable but Russia`s previous efforts to attract international attention to the fact that which countries use these chemicals have been neglected.

Putin said no evidence has been given on the use of chemical weapons by the government of Syria, adding that Russian does not believe that Syrian government has used chemical weapons since they have been advancing in the war and did not need to do it.

Putin said Iran and Russia`s stances on Syria are identical, adding that if US has any evidence to prove that Syria has used chemical weapons, as they claim, they should give their information to the UN inspectors.