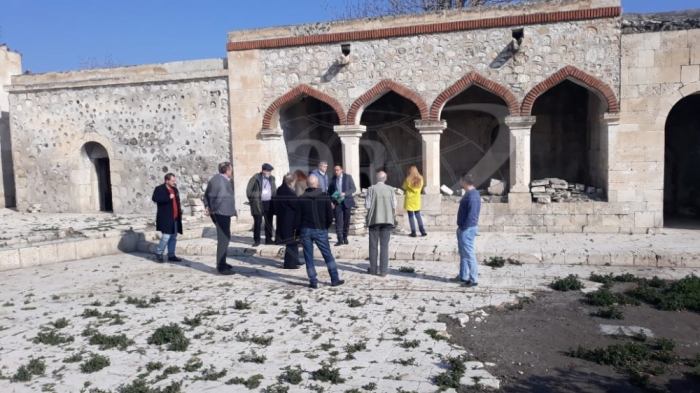 A Russian delegation of the Russian-Azerbaijani Expert Council has visited the Azerbaijani city of Aghdam on the first anniversary of its liberation from the Armenian occupation.

During the visit, the Russian experts familiarized themselves with the vandalism committed by Armenians as they saw the ruins of the Imaret Complex, the Bread Museum, the Alley of Martyrs, the Drama Theater and the Juma Mosque in Aghdam.

The Russian delegation was informed in detail about the history of Aghdam, the current situation, Armenian fascism unleashed in the district, as well as the vandalism against Azerbaijan's historical, religious and cultural sites. They were told that before the Armenian occupation, Aghdam was one of the largest and most developed cities not only in the Karabakh region, but in the entire country. However, after the city was seized by Armenia, all the residential infrastructure, including apartment buildings, kindergartens, schools, and hospitals were demolished, production facilities, as well as Aghdam’s Alley of Martyrs were looted and destroyed.

They were also informed on the construction work to be carried out on the basis of the master plan. It was noted that that during his visit to Aghdam on 28 May, President Ilham Aliyev laid the foundation of a highway, a residential building, an industrial park, a new building of school No. 1, and planted a tree in a local park.

According to the master plan, the territory of Aghdam will cover 1,750 hectares and suburban gardens will be established on an area of 2,450 hectares. A smart and sustainable social infrastructure will be created in the city. There are plans to build 15 schools and kindergartens in the city. The coverage area of schools and kindergartens will be 500 meters.

A large 125-hectare forest park will be established for residents and visitors to Aghdam. The Aghdam canal to be restored will pass through the city and its water will flow into the lake to be created here. An industrial park will also be established in Aghdam. The park will be divided into food industry, small industry and service areas, large industrial enterprises, social and technical zones, a truck depot, and a construction materials base.