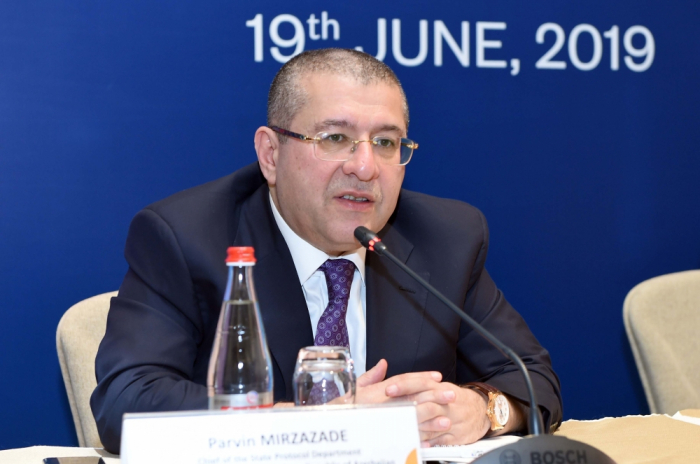 Azerbaijan and Russia are important partners not only in the economic but also in the political sphere, Ambassador-at-Large of the Azerbaijani Foreign Ministry Parvin Mirzazade said at the international round table entitled "Russia-Azerbaijan in a new system of regional security and economic cooperation on Dec. 20, AzVision.az reports.

“Relations between Azerbaijan and Russia have very important strategic importance. Azerbaijan and Russia are not only united by historical ties. We lived in one state. In Azerbaijan, we have an excellent attitude towards Russians. There are a huge number of schools [with Russian sectors], Russian-speaking students and pupils in the country,” he noted.

According to the diplomat, the "3 + 3" platform [between Azerbaijan, Russia, Turkey, Armenia, Georgia, Iran] is a good regional platform for the development of the relations.

"Hopefully soon Azerbaijan and Russia will be able to restore all economic relations between the countries participating in this platform. Azerbaijan has no territorial claims. We managed to reach an agreement with all the players in our region. Thanks to Russia, we were able to stop the bloodshed [during the 2020 second Karabakh war]. Russia sent peacekeepers [to Azerbaijan’s Karabakh region] for further settlement,” he reminded.

“The Armenian side is once again trying to snatch what doesn’t belong to it. If we manage to implement the provisions of the trilateral statement [signed between presidents of Azerbaijan, Russia and prime minister of Armenia to end the second Karabakh war] and open transport communications, we’ll be able to achieve absolutely new realities," added Mirzazade.