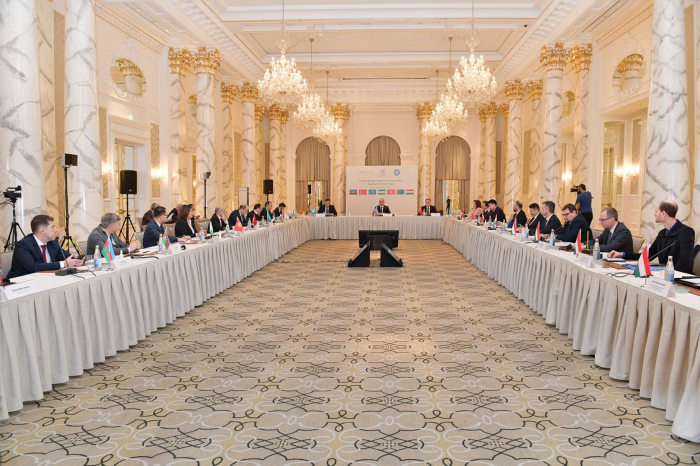 Azerbaijan’s Azercosmos space agency under the Ministry of Digital Development and Transport organized the first business meeting of space agencies and structures of the Turkic states in Baku, AzVision.az reports.

The main purpose of the meeting with the participation of observer countries and members of the organization of Turkic states was to identify areas of joint activities to support projects in the space sector and the development of interaction between Turkic states.

Participants of the meeting, organized as a continuation of the Summit of the Cooperation Council of Turkic-speaking States held on November 12 in Istanbul, noted that the "Turkic World Vision - 2040" document [adopted at the summit] is important for the Turkic states. This document also contains areas of international cooperation in the space sector.

The participants also emphasized the establishment of business relations and space diplomacy with the use of space for both peaceful and commercial purposes, the enhancement of knowledge and skills in space science, education and industry.

The guests were informed about the activities of Azerbaijan in the space sector over the past 10 years, large-scale projects and new opportunities implemented in the countries of Europe, Africa and Central Asia through Azerspace-1 and Azerspace-2 telecommunication satellites, as well as Azersky terrestrial observation satellite.

The event participants also noted that the 74th International Astronautics Congress, which will be held in Azerbaijan in 2023, will become an incentive for the development of the space industry in Azerbaijan, in particular in the region, and that representatives of the Turkic states’ space community have been invited to the congress in Baku.

The meeting continued with active speeches and discussions of representatives of the observer countries of the Organization of Turkic States.

In conclusion, an official document was signed on the development of joint cooperation in the space sphere with the participation of representatives of the observer countries and members of the Organization of Turkic States.