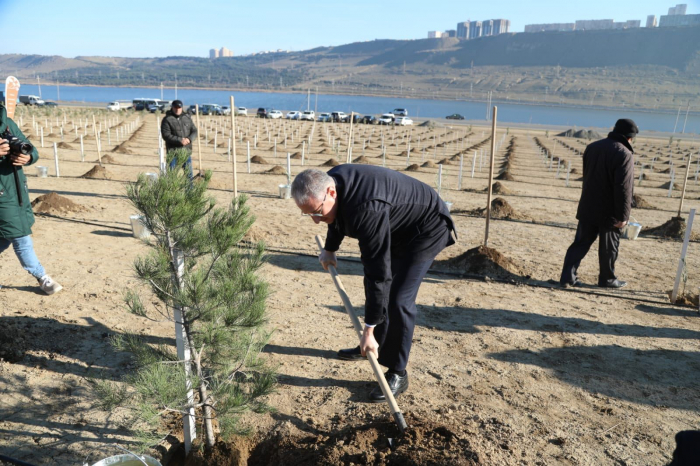 A tree-planting campaign was held, timed to coincide with the 60th anniversary of the President of Azerbaijan Ilham Aliyev, in the village of Khojasan, under the organization of the Media Development Agency (MEDIA) and the Ministry of Ecology and Natural Resources, AzVision.az reports on Dec. 27.

Akhmad Ismayilov stated that the Media Development Agency is actively involved in such projects, the process will continue. He also noted that such projects are very important.

Deputy Minister of Ecology and Natural Resources Firdovsi Aliyev said that the territory in Khojasan, where trees are planted today, amounts to 75 hectares.

“A year ago, the situation on this territory was different. In a short time, trees were planted here, corresponding to the Absheron climate. The water that will be taken from the nearby Khojasan Lake will be filtered and used for irrigation with a drip irrigation system. As a result, 98 percent of the trees will grow. In subsequent years, on the instructions of the head of state, work will continue to improve the environment in the liberated territories of Azerbaijan. These lands were under occupation for 30 years, ecocide was committed there. This year, more than 20,000 tree seedlings were planted in these territories, about three tons of seeds of various tree species were sown. It is encouraging to see that that the seeds that we sowed in March have hatched," Aliyev said.