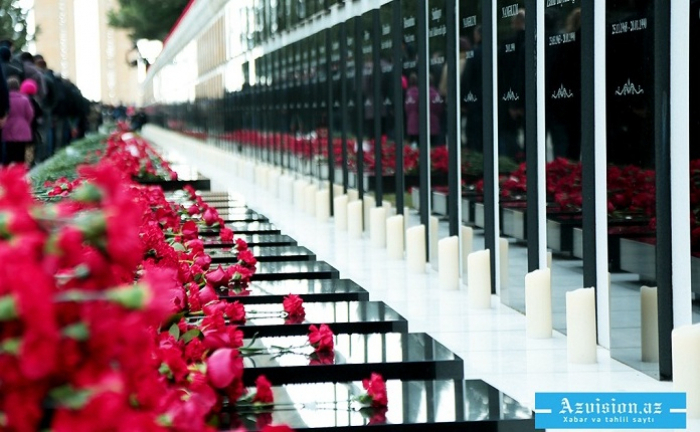 The statement reads as follows: “32 years have passed since the January 20 events, which entered as a heroic page to the history of the struggle for independence of Azerbaijan.

The January 20 events did not break the will and determination of the Azerbaijani people, on the contrary, those events united our people more closely for freedom and brought them closer to the path to independence.

From the late 1980s, Armenia pursued a policy of hatred, ethnic cleansing and genocide against Azerbaijanis, as well as asserted unlawful territorial claims to Azerbaijan.

The Azerbaijani people were outraged by the aggressive actions of Armenia and the support of the USSR leadership and therefore, expressed their strong protest. The deployment of troops against the civilian population in order to break the will of the Azerbaijani people led to massacres in Baku and Sumgayit cities, as well as in other cities and districts of the country. As a result of this crime against humanity, 150 civilians, including children, women and elderly were brutally killed, 744 people were wounded, and 841 persons were unlawfully imprisoned.

On January 21, 1990, despite all the pressures and hardships, demonstrating a political will, the National Leader, Heydar Aliyev made a harsh statement related to this crime committed by the USSR leadership.

The political-legal assessment of this bloody tragedy has been realized through the return of the national leader Heydar Aliyev to power. Thus, in 1994, at the special session of the Milli Mejlis, the decision "On the tragic events of January 20, 1990 in Baku" was adopted. It should be noted that the social protection system for the families of the martyrs of January 20 and persons with disabilities in connection with these events was created by the President of the Republic of Azerbaijan, Mr. Ilham Aliyev.

According to international law, the events that occurred on 20 January shall be interpreted as a crime against humanity, and the military personnel who ordered to commit this massacre and its perpetrators shall be held criminally liable. Under Article 7 of the Rome Statute of the International Criminal Court, the following acts interpreted as a crime against humanity: murder; enforced disappearance; persecution on the political, national, ethnic, cultural or gender grounds; torture and other inhumane acts intentionally causing great suffering or serious injury to body or to mental or physical health.

Azerbaijan has faced severe trials throughout history, bloody crimes, terrorist acts and genocides have been committed against our people at certain stages of history. More than 23,000 Azerbaijanis have died, 50,000 have been injured or became disabled, and about 4,000 citizens of Azerbaijan are still reported as missing as a result of military aggression over the past 30 years.

In 2020, a counter-offensive operation was launched in order to prevent another military aggression against our country and to ensure the security of the civilian population. Azerbaijani territories occupied by Armenia for nearly 30 years were liberated in a short time, and the violated rights of our compatriots were restored.

As a result of the war crimes committed by Armenia against Azerbaijan during these military operations, more than 100 civilians, including more than 10 children were killed, more than 450 people were wounded, 12,000 civilian objects, including more than 3,410 houses, 120 multifloored apartments, 512 civilian infrastructure, including apartment buildings and numerous schools, hospitals, and kindergartens, as well as our historic, religious, and cultural monuments were destroyed or severely damaged.

Given that there are sufficient legal grounds to interpret the January 20 tragedy as a crime against humanity and to punish its perpetrators, no legal assessment has been made so far.

We call on the world community and international organizations to cooperate in order to bring the perpetrators of the January 20 events to justice and give an international legal assessment of this bloody act.”

This statement is addressed to the UN Secretary-General, UN Security Council, UN Office of High Commissioner for Human Rights, UN Office of High Commissioner for Refugees, UN Human Rights Council, the United Nations Children’s Fund, the United Nations Educational, Scientific and Cultural Organization, European Union, Council of Europe, Organization for Security and Co-operation in Europe, International and European Ombudsman Institutions, Asian Ombudsman Association, Organization of Islamic Cooperation and the Ombudsman Association of its member states,  Independent Permanent Human Rights Commission of the Organization of Islamic Cooperation, European Network of Ombudspersons for Children, International Peace Bureau, foreign ombudsmen and national human rights institutions, embassies of the Republic of Azerbaijan and the foreign embassies in Azerbaijan,  as well as to the Azerbaijani Diasporas.