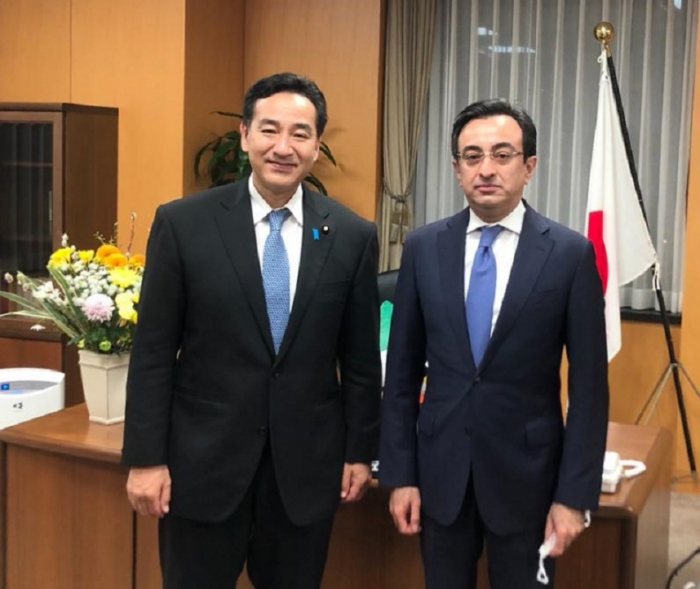 “Azerbaijan is an important partner for Japan in the region,” said Minister in Charge of Economic Revitalization, in Charge of Measures for Novel Coronavirus Disease and Health Crisis Management, in Charge of Social Security Reform, member of the House of Representatives of the National Diet of Japan Daishiro Yamagiwa as he met with Azerbaijani Ambassador to the country Gursel Ismayilzade, AzVision.az reports.

Recalling his visits and meetings held in Baku as a member of Azerbaijan-Japan Inter-Parliamentary Friendship League, Minister Yamagiwa congratulated Ambassador Ismayilzade on the 30th anniversary of the restoration of Azerbaijan`s independence.

Ambassador Ismayilzade congratulated Daishiro Yamagiwa on his appointment as the country’s minister. He briefed the Japanese minister on Azerbaijan`s brilliant victory in the 44-day Patriotic War last autumn. Highlighting the large-scale restoration and construction works carried out in the liberated territories, the ambassador invited Japanese companies to join these works.

Praising the restoration of peace in the region where Azerbaijan is located, Minister Yamagiwa expressed hope that the region will continue developing.

The sides also exchanged views on the prospects of bilateral relations. Gursel Ismayilzade hailed political relations between Azerbaijan and Japan, adding that the two countries enjoy great potential for the development of economic cooperation.

Daishiro Yamagiwa stressed the importance of cooperation in the energy sector. He noted that this year marks the 30th anniversary of the establishment of diplomatic relations between Azerbaijan and Japan, adding that a number of events will be organized on this occasion.