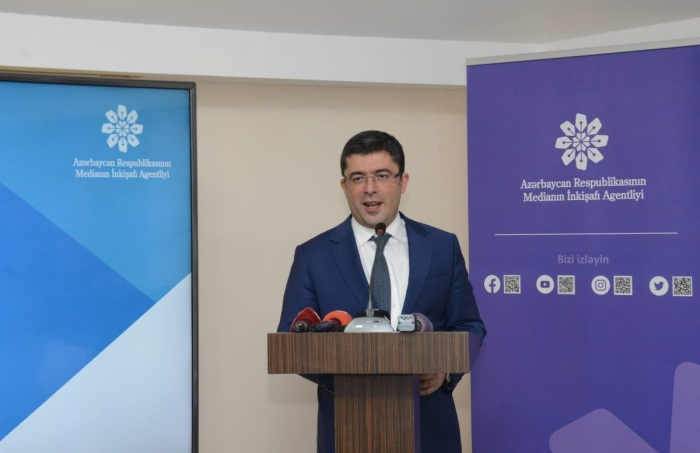 No one should doubt that the new legislation on media in Azerbaijan will correspond to modern media developments, challenges and trends, and expand the scope of activities in the media field, Executive Director of the Media Development Agency (MEDIA) Ahmad Ismayilov said.

Ismayilov made the statement in an official letter to Dunja Mijatović, EU Commissioner for Human Rights Council of Europe, in response to her criticizing the adoption of the draft law on media by the Milli Majlis (Parliament) of the Republic of Azerbaijan, AzVision.az reports citing the letter.

Ismayilov noted that first and foremost, Azerbaijan attaches great importance to the freedom of media as one of the critical components of a democratic society.

“In Azerbaijan, freedom of expression and media freedom are observed in full compliance with the national legislation and international commitments of the Republic of Azerbaijan. The advancement of free media and freedom of expression is a priority for the Government of Azerbaijan, which is reflected in the establishment of the Media Development Agency by the decree of the President of the Republic of Azerbaijan on 12 January 2021. This decree is called to deepen media reforms with a view to ensuring qualitative changes in the media field,” he wrote.

As to the draft law on media, Ismayilov said, contrary to what is mentioned in Commissioner’s letter, it meets all requirements of the contemporary democratic society and is aimed at strengthening mechanisms of ensuring unrestricted and effective implementation of the professional activities of journalists, protecting the creative and editorial independence and pluralism of media, stimulating media to report in an objective and professional manner, respecting the fundamental freedom to seek, receive, and impart information. Therefore, the draft law is in line with Azerbaijan's international obligations, including Article 10 of the European Convention on Human Rights.

“Besides that, the whole drafting process of the new law has been conducted in an inclusive and transparent way. More than 800 journalists and many media experts had an opportunity to discuss the draft law on media before it was introduced for discussions in the Milli Majlis. Moreover, several public discussions with the participation of numerous experts, media and civil society representatives were organized at the Parliamentary level,” Ismayilov said.

Ismayilov also drew attention to the fact that the draft law interprets the concept of "journalist" in a much broader and pluralistic context than the existing relevant national laws, and considers as "journalists" not only those working officially in any media entity but also those acting as freelancers as well.

“Moreover, according to the draft law, in regards to the workplace the application of the status of journalist, is not limited solely to those working for newspapers, magazines, television and radio, but also applies to those working for websites and recognizes their rights stemming from this status. In addition, it should be mentioned that the draft law is not applied to social networks, video sharing platforms, bloggers or other types of activities within such platforms, and in no way attempts to regulate or restrict their activities. As for your concerns regarding the licensing, this practice applies to only television and radio broadcasting and is in full compliance with Part 1 of Article 10 of the European Convention on Human Rights (freedom of expression) already mentioned above,” he wrote.

Furthermore, Ismayilov added, according to the draft law, establishment of a media entity will not require authorisation from State bodies, which will open opportunities for media representatives in Azerbaijan to work in a more pluralistic environment.

“Based on experience of the European countries, the draft law provides an opportunity to maintain the notification register of the respective media entities, facilitate the use by media of simplified procedures related to their activities and more effectively protect the rights of media entities. In order to strengthen accountability and transparency before the public, it instructs State institutions to provide media representatives with detailed information about any fact and incident,” he said.

In Ismayilov’s words, another important development is the advanced provisions aimed at protecting the copyright of information published or broadcasted via media.

“Special attention within the draft also has been paid to establishing mechanisms for protecting the rights of journalists related to the products resulting from their professional activities. Following international practice, the draft law allows journalists to obtain a card confirming they are registered, which is carried out on a voluntary basis. This card will not classify a person as a journalist, but will only confirm that information about its holder is listed in the Media Register,” he added.

Ismayilov emphasized that no one should doubt that the new legislation on media in Azerbaijan will correspond to modern media developments, challenges and trends, and expand the scope of activities in the media field.

“It will protect the rights of the media entities, including those arising from the development of information and communication technologies, and guarantee media freedom and freedom of opinion and expression, which include the freedom to seek, receive and impart information,” he added.