Why does Iran conduct military exercises near the border with Azerbaijan? - OPINION from Tbilisi 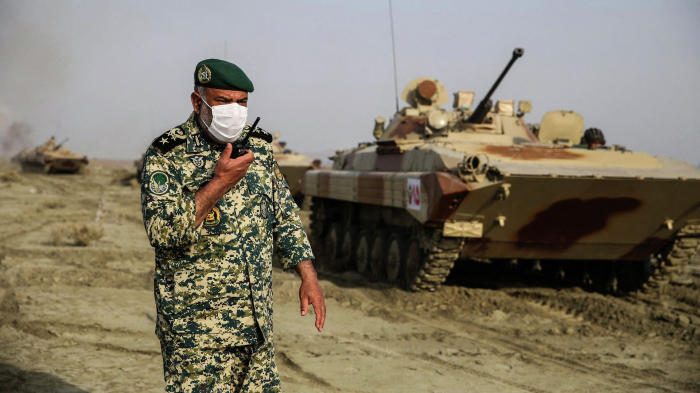 Iran's previous exercises were held in the Araz River area last October with the participation of the Iranian ground forces and the IRGC, and their purpose was to respond to the "presence of Israeli agents" in the countries of the region and the possibility of "changing historical borders."

Since the beginning of the Karabakh war, Iran has conducted 3 exercises in the Araz region, but the geographic scope of these exercises covered the entire border strip of the provinces of Ardabil and East Azerbaijan, while the previous exercises were smaller in size and geographical coverage.

Brigadier General Mohammad Pakpur, commander of the IRGC ground forces, stated that the exercise program included the practice of building a bridge over the Araz River and seizing strategic positions. During this exercise, for the first time, engineer and sapper units of the IRGC Ground Forces installed mobile bridges for the transfer of armoured units along the Araz River. On the third day of the exercise, armoured and engineering units of the IRGC crossed the bridge installed on the Araz River and built a fixed bridge on this river to facilitate the movement of armoured units.

In addition, during these exercises, units and special units of the IRGC jointly worked out scenarios for ensuring security and defence. As part of this exercise, the special forces of the IRGC practised capturing the heights and communication routes of a mock enemy using Mi-17 helicopters and conducting helicopter operations, and combat drones managed to destroy the alleged positions of the enemy.

Tehran has said that the IRGC ground forces exercises in the Araz region do not pose a threat to its neighbours. According to Azerbaijani news agencies, Iranian Ambassador to Baku Abbas Mousavi noted that Tehran had informed the government of the Republic of Azerbaijan in advance about these exercises.

Simultaneously with large-scale exercises of the IRGC ground forces, this exercise received wide coverage in the Azerbaijani media. Some of them suggested that by holding these exercises, Tehran wants to prevent the opening of a communication corridor between the Republic of Azerbaijan and the Nakhchivan Autonomous Region.

It is also essential to note that the military exercises of the IRGC ended on October 20, on the day of the arrival of Turkish President Recep Tayyip Erdogan in Baku and the visit of Iranian Foreign Minister Hossein Amir Abdollahian to Yerevan. The Iranian minister, along with his Armenian counterpart Ararat Mirzoyan, attended the opening of the Iranian Consulate General in Kapan (Syunik region). The place and time of the opening of the Iranian Consulate General were not chosen by chance. In this regard, Iran underlined its significance of it for keeping the area under the control of the Armenian government.

Hossein Amir Abdollahian stated: "We oppose the presence of foreigners in this region, whether in Azerbaijan or Armenia, and we will discuss strategic issues and joint regional cooperation at a meeting with high-ranking officials of Armenia."

Furthermore, the head of the Iranian Foreign Ministry added: "Tehran will not tolerate any changes in the historical borders of the region and this is a red line for Tehran." According to the Tasnim News agency, Minister Abdollahian also stated that Iran will take all necessary measures to prevent such intentions.

A similar statement was made by Iranian President Ebrahim Raisi, who attended the 6th Summit of the Conference on Interaction and Confidence Building Measures in Asia (CICA). Raisi stated that any changes in historical borders, regional geopolitics and Iran-Armenia transit routes are unacceptable.

Statements by Iranian top politicians and commanders of the IRGC about "the inadmissibility of changing the Iranian-Armenian border" show Tehran's misery and alertness regarding this issue, At the same time, they are called upon to show third parties the seriousness of the intention of the Iranian side.

Turkish President Erdogan, to clarify part of his speech, hinted at Iran's concern about the opening of a communication corridor between Azerbaijan and the Nakhchivan Autonomous Republic, and stated that "the fear and concern of some circles about the Zangezur corridor are groundless."

The coincidence of these statements and the conduct of the exercises with the visit of the Iranian Foreign Minister to Armenia added suspicions to relations between neighbours.

It is also possible that the authorities of the Islamic Republic are probably trying to fill the power vacuum in the South Caucasus and strengthen their positions in the region while the Russian position in the region weakens due to the military invasion of Ukraine and Western sanctions are getting tightened.

It should be noted that Iran is the least represented (compared to Turkey and the Russian Federation) in the South Caucasus - due to tough Western sanctions, its positions in the region are relatively weak, and in this context, Tehran cannot accept the establishment of Azerbaijani-Turkish control over the Iranian-Armenian border.

If we take into account the ongoing mass protests within the country, we can also assume that the IRGC is trying to create a psychological atmosphere with these military exercises and distract society from internal problems.

Vasily Papava, is an expert on the Middle East, especially for Vzglyad. az.