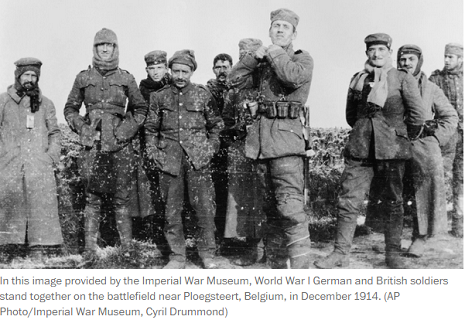 And then something miraculous and moving happened.

"About 10 o`clock this morning I was peeping over the parapet when I saw a German," wrote Capt. A.D. Chater, in a letter to his mother, "waving his arms, and presently two of them got out of their trench and came towards ours."

Chater, whose letter was released by the Royal Mail, goes on: “We were just going to fire on them when we saw they had no rifles, so one of our men went to meet them and in about two minutes the ground between the two lines of trenches was swarming with men and officers of both sides, shaking hands and wishing each other a happy Christmas."

Across the front lines, soldiers marked a somber Christmas together. Five months of war could not dampen holiday bonhomie. Soldiers exchanged pleasantries and cigarettes. They buried the dead that had been left strewn in no-man`s land.

"From what I gathered most of them would be glad to get home again as we should, wrote Chater. "We have had our pipes playing all day and everyone has been walking about in the open unmolested." 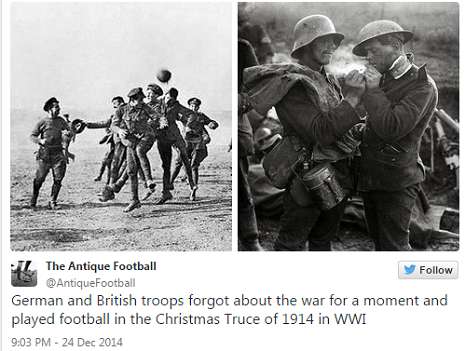 The story of this "Christmas Truce" is a poignant one, particularly in Britain, where government agencies and other organizations have commemorated the moment. Popular grocery retail chain Sainsbury`s even issued a Christmas Truce-themed ad.

The Christmas Truce, of course, was no such thing: The war did not stop. But it was an indelible moment of humanity in what soon became the ghastliest conflict the world had yet seen.

"The war hadn`t got that sort of, as you say, dirty at that stage," says British historian Alan Wakefield, in an interview with CBS. "It`s really 1915 that things like poison gas comes along. Zeppelin airships are bombing London, Germans sink the liner Lusitania with civilian casualties. And the propaganda machine hasn`t really fed on that and actually created those sort of hatreds between the two forces."

Even then, there was bloodshed on Dec. 25, 1914. Researchers have found evidence of rival sniper fire killing various front line troops. At least 149 soldiers from the British Commonwealth died that day. And far worse was to come.