Where do the world`s 2,089 billionaires live? 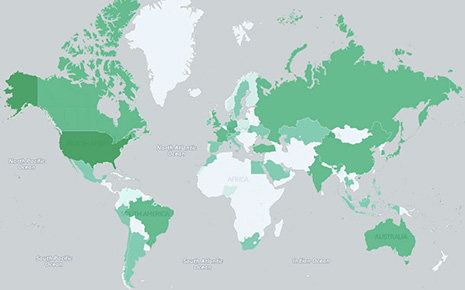 The latest Hurun Global Rich List 2015 charts every dollar billionaire currently living in the world. It shows an additional 222 billionaires were created last year, almost a third of whom were in China.

The US still holds the crown for most mega-wealthy residents, at 537. But China is not far behind with 430, having acquired 72 new billionaires in 2014.

India now holds third spot, having increased its share of dollar billionaires from 70 to 97, leapfrogging Russia (93) and the United Kingdom (80) in the table.

In total 67 of the world`s countries are home to at least one billionaire.

New York remains the favourite city of the uber-rich, with 91 billionaires, while London is still fifth with 49.

Bill Gates remains the world`s wealthiest individual according to the study, increasing his wealth to $85 billion (£56bn).

Mexican tycoon Carlos Slim is second with $83bn, while Facebook founder Mark Zuckerburg breaks into the global top 10 for the first time.

Click or tap on the map above to find out how many billionaires are living in each of the world`s countries.

Those countries which present no value when clicked or tapped on the above map do not have a billionaire living within their borders.