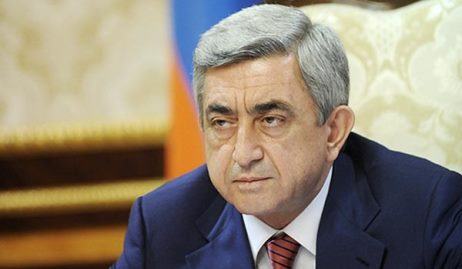 The Caucasus Mountains run between the Black and Caspian Seas and are the historical bridge between Europe and Asia. But they could soon turn into a nuclear flashpoint because of dangerous saber-rattling by Armenian President Serzh Sargsyan.

Armenia has long and illegally claimed territory in western Azerbaijan, an assertion backed by military offensives against Azerbaijan including a massacre of 600 civilians in 1992. Whenever an opportunity appeared to cool tensions and work toward comprise, Armenia has escalated. Now, Armenia may be taking the region to the brink of nuclear war.

Last fall, Armenia received the Iskander missile system from Russia, a major provocation meant to send a message to Azerbaijan and NATO ally Turkey. This is consistent with Moscow's policy of using missile deployments in Eurasia and the Middle East to threaten western interests.

The Iskander short-range ballistic missile system is designed to destroy small targets at up to 300 miles. This means that Iskander missiles deployed in eastern Armenia could reach targets all over Azerbaijan, including the coastal capital of Baku.

In addition and alarmingly, Iskander missiles are capable of being fitted with nuclear warheads.

As if the presence of the missiles were not a clear enough menace, Armenian President Sargsyan visited the illegally held territories and bragged that his government possessed a “state-of-the-art, powerful striking force.” He went on to identify potential targets in Azerbaijan – “the most important infrastructure” – and followed up with a chilling pronouncement about his intentions as head of the Armenian military. “If needed, the commander-in-chief of the Armenian forces will without batting an eyelid order volley fire by Iskander,” he said.

This new round of war-mongering is troubling in several respects and raises tensions in Baku and throughout the region. In addition to unnerving Armenia’s neighbors, Sargsyan’s statements raised concerns in Washington, D.C. Washington’s Jamestown Foundation recently held a panel discussion on Capitol Hill to address the danger posed by Armenia’s deployment of the Iskander missiles, writing that the new weapons “threaten European stability, put U.S. allies at risk and potentially violate the 1988 INF [Intermediate-Range Nuclear Forces] Treaty.”

Sargsyan’s inflammatory rhetoric destroys the myth propagated by separatists that the Armenian-seized Azerbaijani territory is an independent republic. Rather, the region occupied Azerbaijan and is now a staging area for missiles pointed at the rest of Azerbaijan.

It is also clear that Sargsyan is using the missiles as a political weapon. Armenia’s president is seeking to stir his nationalistic supporters against Azerbaijan to increase voter turnout in elections. Sargsyan is rejecting bids from more sober leaders in Armenia, including former president Levon Ter-Petrossian, for a plan that would reduce tensions between the two nations.

And then there’s the Russia question. Armenia is the only nation that has received the Iskander system from Russia. Why Armenia? Possibly because “the most important infrastructure” in Azerbaijan that could be targeted by the missiles includes companies owned and operated by Western entities, including American ones, that ensure Europe’s energy security.

Natural gas from Azerbaijan flows by pipeline from the Caspian Sea west through Georgia and into Turkey and Europe. Should that flow be disrupted by military conflict, Europe would be at the mercy of Russia for its energy needs.

Another possibility: Russia might be attempting to rebuild its Soviet-era footprint in the Lesser Caucuses as it has done in Crimea and is attempting in Eastern Ukraine. It’s no secret that Russia and Armenia recently established a joint air defense pact.

If Sargsyan’s troubling boasts about his willingness to deploy his new Iskander missile system were the only such noise coming from Armenia, it would be worrisome enough. But in the past six months, top members of Sargsyan’s administration have made more than a dozen similar statements.

Azerbaijan has more than twice as many people as Armenia yet its Gross Domestic Product is nearly seven times greater. While Armenians have watched their leaders diminish their economy, Azerbaijan has prospered. Much like North Korea, military posturing is all Armenia has left.

This is a dangerous time for Azerbaijan and the entire region because of Armenia’s reckless pursuit of offensive weapons and incendiary rhetoric. Azerbaijanis at home and in the U.S. have depended on America as a good friend and strong ally. The world can only hope that that will continue under the new Trump administration.