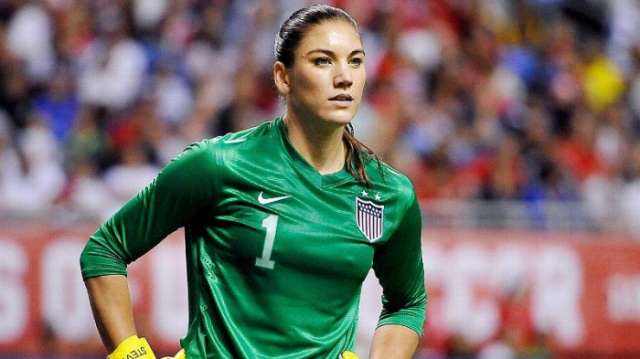 U.S. soccer star Hope Solo accused ex-FIFA President Sepp Blatter of grabbing her buttocks during an awards ceremony five years ago, an allegation that the former head of international football’s governing body denied, AzVision.az reports citing Reuters.
Solo, 36, told a Portuguese newspaper that Blatter touched her inappropriately in January 2013 during the Ballon D‘or awards ceremony in Lisbon. A spokeswoman for Solo on Saturday confirmed her comments.

“I had Sepp Blatter grab my ass,” the former goalkeeper on the U.S. national women’s team said in an audio interview with Expresso, posted on Saturday.

“It was at the Ballon D‘or one year, right before I went on stage,” said Solo, who received FIFA’s women’s player of the year award in 2013. “It’s been normalized.”

A spokesman for Blatter said in a phone interview on Saturday that Solo’s allegation was “absurd and ridiculous, and it is not true.”

The high-profile allegations have inspired an online campaign, tagged #MeToo, that has encouraged men and women in all walks of life to reveal their own experiences with sexual harassment and assault, often years after they occurred.

Solo last month posted a statement on her Instagram page that commended women in the entertainment industry for having courage to reveal their experiences with sexual misconduct and suggested she had been a victim herself.

“From inappropriate comments, unwanted advances and grabs of the ass to coaches and GMs and even press officers speaking about players ‘tits’ and physical appearance, sexual harassment is rampant in the sports world,” Solo wrote online.

“I always felt I’d ‘handled it’ and stood up for myself in those situations, but there were never any consequences for the perpetrators,” she added.

Solo, considered one of the best goalkeepers in the world, played on the U.S. women’s soccer team from 2000 to 2016, when it won two Olympic gold medals and a World Cup.

Blatter is in the midst of a six-year ban from all soccer-related duties imposed by Zurich-based FIFA’s ethics committee after a corruption scandal.