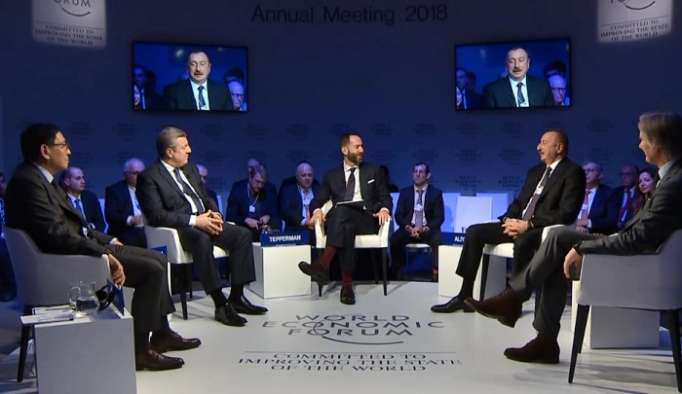 All the basic freedoms in Azerbaijan are provided, including freedom of press, which is absolutely free, Azerbaijani President Ilham Aliyev said at the 'Strategic Outlook: Eurasia' panel at the World Economic Forum in Davos on Jan.23.

“If you look to the substance, all the basic freedoms in Azerbaijan are provided, including freedom of press, which is absolutely free. About 80 percent of the population of Azerbaijan are internet users and when internet is free, without any censorship and absolute majority of population are using internet, it is difficult to talk about restriction of press,” said the president.

President Aliyev noted that the rating of Azerbaijan in the World Press Freedom Index is based on political grounds.

“It has nothing to do with reality. Again, all the fundamental freedoms are provided and our government is implementing a very important project of bringing broadband internet to every village,” he added. "Therefore, this classification is based on a very biased approach, sometimes very hostile approach."

“It is generated in some political centers in the West. I’d not prefer to talk more precise about that. I think it is clear where it comes from. The reason is very simple: because Azerbaijan is a country which is implementing independent policy, a policy based on our national interests. We do not join any adventure, which is risky and which can create complications for our country. As I said before, we do not have internal risks, we have a stable political and economic situation. All the potential risks which we may face may come from outside. There have been a lot of attempts to drag Azerbaijan into a kind of campaign against some countries. We are always very neutral, we do not play against anyone and we are not a part of any campaign which is risky and which is not in line with our national interests,” noted the president.

Therefore, main reasons for attacks is that some may consider Azerbaijan to be too independent for not a very big country and this kind of ratings of some NGOs are aimed to discredit the country’s reputation, to damage its reputation, to present Azerbaijan as a non-democratic country, which is not true, said President Aliyev.

“And again, we are talking about political development and economic development. You cannot not separate one from another. And in the country, which according to World Economic Forum Competitiveness Report is number 35th, I think it is a good indicator that the country is free. Davos also recently issued a rating of public trust in politicians and Azerbaijan is number 20 and in inclusive development index among developing countries, Azerbaijan is number 3. We need to look to the substance, to the real situation and separate political agenda or some expectations towards Azerbaijan from reality,” the president concluded.