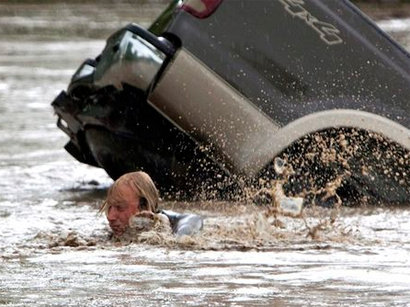 Around 75,000 people in the western Canadian city of Calgary were evacuated amid flooding that claimed three lives Friday, news reports said.
Houses and a sports stadium in the city centre were under water after the Bow River burst its banks, CTVNews broadcaster reported.

The bodies of two men were recovered from the river around 60 kilometres south of Calgary on Thursday, the report quoted police as saying. Another body had also been located, it said.

The river was swollen by days of heavy rain and snowmelt coming off the Rocky Mountains, according to news channel CBC.

Several more people were missing, police were quoted as saying.

A localized state of emergency was declared in the worst-affected areas, and the military were deployed to help with rescue operations.

Tens of thousands of residents in other communities across the south of the state of Alberta were also evacuated, as rain into the weekend was predicted to worsen the flooding.