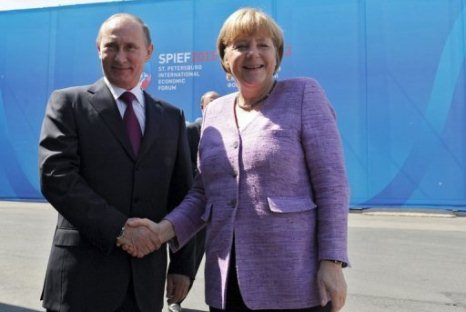 Germany`s Angela Merkel and Russia`s Vladimir Putin have visited an exhibition featuring art looted from Germany by the USSR in World War II.
Reports said Mrs Merkel had intended to use the visit to the Hermitage Museum in St Petersburg to ask for the items to be returned.

But she toned down her remarks saying that Russia and Germany would continue talks about the issue.

He said it was "hardly worth starting an argument now" and added that the two sides should seek "ways to resolve it".

Mr Putin denied there had been any suggestion of cancelling the visit.

"We had not cancelled anything, we just wanted to see if we would have enough time," he told reporters at a news conference with the German leader.

Mrs Merkel, who was in St Petersburg to address the annual St Petersburg International Economic Forum, said it was an important step that the works were now on public display for the first time.

"It gives us great happiness that we can see all of them today. We will continue dialogue on all questions regarding valuables brought from Germany,`` she said, according to the Russian Interfax news agency.