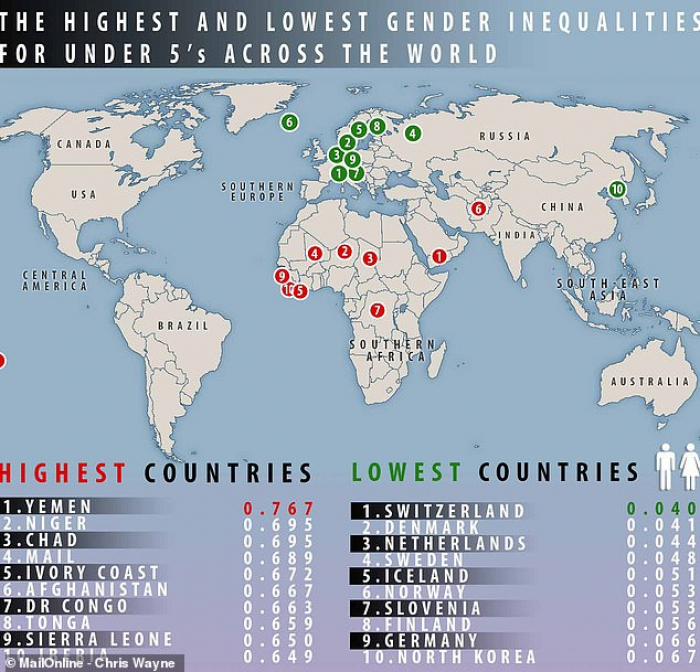 Gender inequality could be driving the deaths of millions of girls under five years old worldwide, research suggests.

Young girls are more at risk of death in countries where women have insufficient healthcare, poor education, few seats in parliament and little role in the workplace, a study found.

Out of 195 countries, Yemen is the worst with a gender inequality score of 0.767 out of a possible one, compared to just 0.04 in Switzerland.

In countries where women are valued less than men, young girls may be more at risk of death due to maternal malnutrition during pregnancy, exposure to domestic violence in the womb and even infanticide. 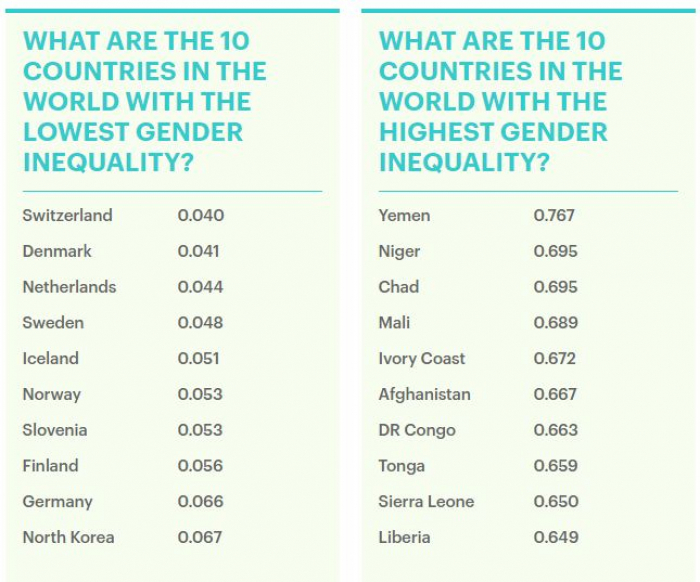 The London researchers analysed the under-five mortality rates of nearly two Dr hundred countries based on information from the UNICEF database.

This was then compared against the countries' Gender Inequality Indexes, which account for reproductive health, 'empowerment' and economic status.

Empowerment is measured by the share of parliamentary seats held by each sex, as well as the difference between the number of men and women in secondary and higher education.

Overall, boys are more likely to die young than girls due to a 'biological and genetic disadvantage'.

Dr Gallo told MailOnline: 'Contrary to what one would expect child mortality is not the same among boys and girls under natural conditions.

'We are looking at the relative change,' Dr Gallo told MailOnline. 'The higher the gender inequality, even though more boys still die than girls, a girl’s risk of death is higher than it would naturally be.'

The UK is not far behind with a male childhood mortality rate of 4.9 compared to 3.9 in girls. It has a gender inequality index of 0.131.

Although some may be surprised to see North Korea in the top 10 of the world's lowest gender inequality rates, Dr Gallo believes it may come down to how the data was collected.

She told MailOnline: 'When you use these indicators at country level there is always the risk of bias at collection level.

'It clearly relies on what a country reports.'

'Gender inequality perpetuates itself through the generations via these unfair odds of survival,' Dr Gallo said.

'Because of a sexist ideology which values boys over girls, young girls are often at greater risk of mortality through diminished access to health resources, as well as through heightened exposure to health risks.

'These girls are also further exposed to this risk via their mothers, who may themselves be penalised and valued less than mothers of sons, and less able to provide for their daughters.'

In countries like India, girls are less likely to be vaccinated and are more at risk of  circumcision, which can cause infections and bleeding.

They add further studies are also required to determine how gender inequality leads to childhood death.

More than half of these deaths were deemed to be preventable and a result of barriers to simple, affordable healthcare.

And 45 per cent of these fatalities were linked to malnutrition.

Youngsters are more at risk of an early death if they are born in rural areas, live in poor households or have mothers without a basic education, the study found.