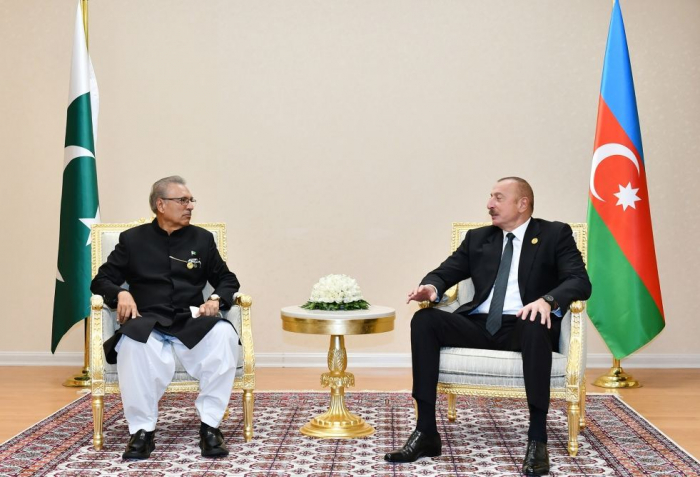 AzVision.az presents the full transcript of the presidents' meeting below:

President Ilham Aliyev: Hello. I am very delighted to see you again. I remember your visit to Azerbaijan. We had a good time together.

President Arif Alvi: This is the first time we have met since you returned your lands.

President Ilham Aliyev: Yes, thank you very much for your support.

President Arif Alvi: I have always said that we must learn this from you. You chose the right time. The world has accepted it. It had to be done. In fact, it was a step taken in accordance with the unfulfilled UN resolutions.

President Ilham Aliyev: They had remained unfulfilled for almost 30 years.

The sides hailed the relations between the two countries. Pakistan’s firm and principled position in connection with the military aggression of Armenia against Azerbaijan, which is already in the past was emphasized.

During the meeting, the sides exchanged views on the development of relations between the two countries in various fields, emphasizing the role of the intergovernmental commission. They underlined that next meeting of the commission would be held soon.

The sides also noted the importance of recent high-level visits between the two countries. At the same time, the presidents exchanged views on matters related to joint cooperation within international organizations. They expressed concerns over the growing Islamophobic tendencies in the world.

The importance of increasing people-to-people contacts between the two countries and the further strengthening of cooperation in tourism, business circles, culture, science and other fields was underlined at the meeting.

The President of Pakistan once again thanked the Heydar Aliyev Foundation for the projects implemented in his country.

Note, the meeting was held within the 15th Summit of the Economic Cooperation Organization (ECO) in Ashgabat on November 28.