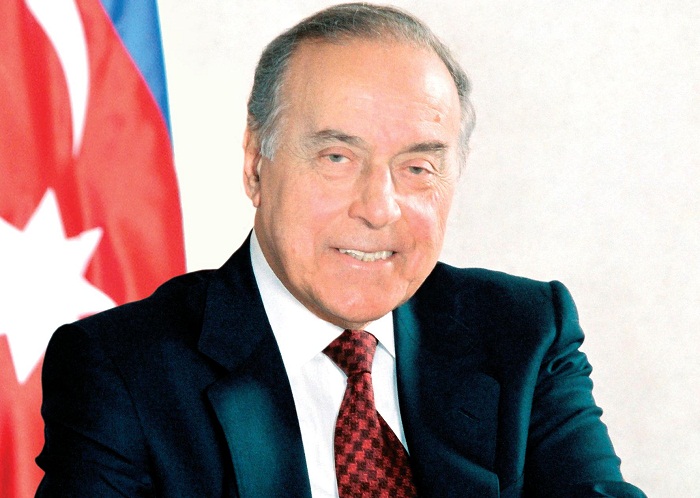 National leader of the Azerbaijani people, President Heydar Aliyev was born in Nakhchivan City of Azerbaijan on 10 May 1923. Heydar Alirza oglu Aliyev passed away in Cleveland Hospital in the United States of America on December 12.
Heydar Aliyev was awarded a number of state orders and medals, international awards, and was elected honorable doctor of universities in many countries. Heydar Aliyev was awarded the Lenin Order four times, Order of Red Star, numerous medals, also orders and medals of foreign countries, and granted a title of the Hero of the Socialistic Labor twice. Now, world leaders on Azerbaijan National Leader:

Heydar Aliyev had been one of the key persons in the Caucasus for a long period. His personal efforts in the establishment of current friendship relations between the United States of America and Azerbaijan, as well as defence of Azerbaijan`s independence is of vital importance. Under his leadership United States of America and Azerbaijan have been partners in the fight against the terrorism including all the operations carried out in Afghanistan and Iraq. Steadiness he demonstrated in the field of achievement of the just and long-term solution of Upper Garabagh tragedy via the peace negotiations had been of great importance in the maintenance of the peace and stability in the region. In the meantime, his position and efforts demonstrated in attraction of the large-volume foreign investments that strengthened economic development of Azerbaijan played a key role. These achievements had improved lives of million Azerbaijanis and created opportunity for Azerbaijan to come into the twentieth century as the modern state.

George BUSH,
President of the United States of America.

Significant state official, who had gained respect and great influence all over the world, passed away. Heydar Alirza oglu Aliyev`s effective activity had been devoted directly to the common history of our nations during many years. He laid down the foundation of strategic cooperation between Russia and Azerbaijan, made great contribution to strengthening of our friendship and mutual understanding. His decease is an irreplaceable loss for the Commonwealth of Independent States and the whole international society.

This unique person had brought Azerbaijan to the blossoming of Azerbaijan. During our meetings, especially while conducting negotiations on the Nagorno-Karabakh conflict, I highly esteemed his heroism, wisdom and steadiness in the solution of the conflict peacefully.

Jacques CHIRAC,
President of the Republic of France.

Heydar Aliyev had been a great leader of Azerbaijan. He brought stability to his country in the period of chaos. Azeri nation should be proud of the heritage he input. In the period of his activity as President, progress in the relations between our countries had been achieved and Azerbaijan had improved its relations with Europe. His successful visit to Britain in July 1998, in particular our meeting in my residence located at 10, Dawning Street, is still in my memory. He established the foundation of strong relations existing at present between Azerbaijan and the United Kingdom. We are proud that through the great investments put by British companies the United Kingdom impacts on the progress of Azerbaijan.

Heydar Alirza oglu has done a lot of work aimed at strengthening the centuries-old friendship between the Kazakh and Azerbaijani nations, development of the Republic of Azerbaijan, as well as CIS.

Nursultan NAZARBAYEV,
President of the Republic of Kazakhstan.

Famous politician in the international world, having friendly feeling for the People`s Republic of China, Mr. Heydar Aliyev had played an important role in the Chinese -Azerbaijani friendship relations.

Hu SZINTAO,
Chairman of the People`s Republic of China.

I am very happy and proud to know Heydar Aliyev as a person, who due to far-sighted and talented leadership, managed to develop and bring Azerbaijan to the current influential position in all spheres. Along with all his efforts for peace and prosperity of Azerbaijan, Heydar Aliyev`s activity aimed at turning the Caucasus region into a peaceful area, will remain in our memory forever. Joint projects that started due to priceless contribution of Heydar Aliyev has made our friendly and brotherly states closer to each other, proved again that the relations between our countries had been laid on a permanent basis.

Extraordinary services of deceased Heydar Aliyev in the name of happiness and prosperity of Azerbaijan, peace in the region and the world have taken their glorious place in the Turkish and world history.

Heydar Aliyev had invaluable services in the strengthening of the ties between our countries and development of Azerbaijan. I remember very well our meeting in July 1998 during his visit to the United Kingdom.


Name of Heydar Aliyev as a respectful politician and state official and his influence will be endlessly connected with the worthy place of the Azerbaijan Republic in the international union. We highly assess the great personal contribution of Heydar Aliyev in the development and strengthening of Azerbaijani-Bulgarian friendship ties in the conditions of the modern international progress.

Georgy PIRVANOV,
Former President of the Republic of Bulgaria.


Historical role of Heydar Aliyev in the organization and strengthening of Azerbaijan`s independence, increase of the influence in the international world, development and expanding of bilateral ties between our nations is invaluable.

Islam KARIMOV,
President of the Republic of Uzbekistan.

Heydar Aliyev is considered and esteemed in the Republic of Moldova as a great patriot, fighter for the strengthening of friendly relations between our countries, ideals, stability and defence of the security in Europe and all over the world.

Vladimir VORONIN,
Former President of the Republic of Moldova.

The Republic of Azerbaijan has lost a great state official in the personality of Heydar Aliyev, who has had deep impact on the life of the whole country for many years and took legendary place in the history of Azerbaijan. His name will be forever tied with the historical achievements in the stability and independence of the country.

Gerhard CHRODER,
Former Chancellor of the Federative Republic of Germany.

His name is forever connected with the native land. Independent and sovereign Azerbaijan`s prosperity and progress, stability of the social-political situation in the country and search for strong peace in the region brought high influence and sincere respect to Heydar Aliyev all over the world. Azeri nation and all sincere people who are thankful for his works and services will remember his name forever.

Emomali RAHMONOV,
President of the Republic of Tajikistan.

Heydar Alirza oglu is well known in Kyrgyzstan as an eminent state official, world-scale politician who had endless services in the organization and development of independent Azerbaijan. Under his leadership, the Republic of Azerbaijan has gained great successes on the way of independent development, has become well-known and respected member of the world union. Heydar Alirza oglu devoted all his talent and wisdom, love to the Motherland, diligence and devotion to the work of progress of Azerbaijan.

Asgar AKAYEV,
President of the Republic of Kyrgyzstan.

Independent Azerbaijan Republic has taken its deserved place in the world union in the last few years due to leadership of eminent state official Heydar Aliyev. I am following and supporting all works carried out in establishment of legal state, successful realization of the economic reforms in Azerbaijan.

Due to wise and far-sighted leadership of late Heydar Aliyev, Azerbaijan has become a country acting as the guarantor and stability factor in the current foreign policy, moving confidently on the path of social prosperity and economic development, and ensures its reliable position day-by-day as an influential member of the international union. Loss of Heydar Aliyev, who was the architect of Azerbaijan`s successful and stabilizing foreign policy, made our nations, which are connected with historical and cultural ties, grieve.

Heydar Alirza oglu Aliyev had been a convinced and active supporter of the all-round Azerbaijani-Russian ties in the XXI century, strengthening strategic cooperation of the two states.

Dagestani people knew Heydar Alirza oglu very well and will always remember his positive attitude to Dagestan, because due to this attitude, friendship and sincere neighbourhood traditions were established between our nations and existed for many years. His name will forever remain in our memories.

Mohammadali MOHAMMADOV,
Former Chairman of the State Council of the Republic of Dagestan.

It is very difficult to assess the role of Heydar Alirza oglu in the political life of the countries of the Commonwealth of Independent States. Being a wide politician, he managed to find constructive decisions in complicated situations. Not only Azerbaijan, but all the countries in the post-Soviet space have lost their influential state leader.

Heydar Alirza oglu had been famous as a great politician, great head of state and patriotic, nice and talented person. A number of bright and significant pages of the history of the Soviet State, then CIS countries and the Republic of Azerbaijan are connected with his name.

Murtaza RAHIMOV,
Former President of the Republic of Bashkortostan.

Services of Heydar Alirza oglu in the bringing up the whole generation of modern politicians in the whole post-Soviet space are invaluable. I will be keeping in my hearts all memories related to my personal meetings with Heydar Alirza oglu as a world-known eminent state official.

There are deep-rooted historical and cultural ties between Azerbaijan and Turkey. Dear Aliyev showed extraordinary efforts to revive these relations and development of relations between Turkey and Azerbaijan.

Heydar Aliyev is among the present founders of the new history of a modern democratic Eurasia as one of the eminent leaders of the XX century.

Heydar Aliyev is a great personality. He is my friend, brother. He will always have his place in my heart.

Due to Heydar Aliyev’s wise management, Azerbaijan has gained far more achievements as compared with all other states of the former Soviet Union. He is indeed the founder of a new Azerbaijani state.

I do not know any other person, who would love Azerbaijan, Azeri nation as Heydar Aliyev did.