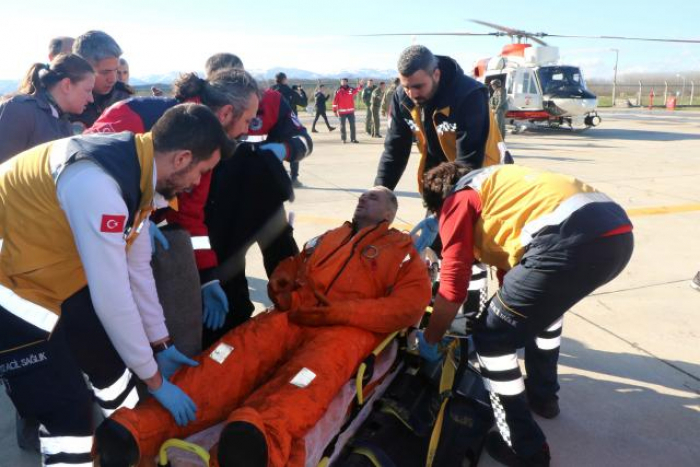 One Azerbaijani citizen died as a cargo ship sank in the Black Sea off the coast of Turkey, AzVision.az reports referring to the Ministry of Foreign Affairs of Azerbaijan.

"The Azerbaijani Embassy in Turkey confirmed that there were two Azerbaijanis aboard a cargo ship that sank off the coast of Turkey's Samsun province. According to the embassy, as a result of the shipwreck, one Azerbaijani citizen died and the search continues for the other one," the ministry said.

The cargo ship, sailing under the Panama flag, sank in the Black Sea off the coast of Turkey's Samsun province on Jan. 7.

There were 20 people on board, earlier reports said.

Presently, there are no Azerbaijani citizens among the rescued crew members of the ship that sank in the Black Sea off the coast of Turkey's Samsun province, a representative of the Samsun branch of the Turkish Coast Guard told AzVision.az.

"The search operation is underway," the Coast Guard representative said.

Two crew members of the ship are Azerbaijani citizens, the Turkish media reported earlier. One of them is the captain of the ship.

There were also nine Ukrainian and two Russian citizens on board.

So far, six of the crew members have been rescued and the body of another crew member was found, according to the Turkish media.

Identities of the rescued crew members and the deceased have not been revealed yet.

The cargo ship, sailing under the Panama flag, sank in the Black Sea off the coast of Turkey's Samsun province on Jan. 7.

Six people were killed and seven others were rescued by Turkish Coast Guard teams after a Panama-flagged vessel sank in the Black Sea off Turkey's northern Samsun province, Daily Sabah cited the governor's office as saying on Monday.

According to a statement released by the Interior Ministry, coastguard teams were dispatched off 77 miles Samsun after receiving a distress call from the Volgo Balt 214.

The crew of the ship consisted of 13 people, the ministry said. While the coastguard managed to save seven of the crew and retrieve bodies of the six deceased.

Two boats, three helicopters, and an aircraft were deployed for the search and rescue operation.

The vessel was heading to Samsun from the Russian port of Azov and it was carrying coal, reports said.

Two people died and another four were missing on Monday after a ship carrying coal sent a distress signal off the northern coast of Turkey, the coast guard and the local governor’s office said.

The Panama-flagged vessel, which departed from Russia’s Azov port, sent out a distress signal around 148 kilometers (92 miles) off the northeastern Black Sea province of Samsun, the coast guard said.

The coast guard said the distress signal was received regarding a “possible sinking” of the ship.

Seven members of the crew had been rescued so far while a search and rescue operation continued for the other four, the coast guard said. The operation was being carried out by a plane, two helicopters and two boats, it said, adding that one airforce helicopter was also joining as back-up.