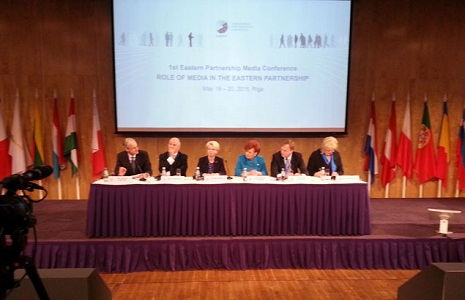 The first Eastern Partnership (EaP) Media Conference is being held in Riga, Latvia. More than 300 journalists and specialized media representatives from Azerbaijan, Georgia, Armenia, Moldova, Ukraine and Belarus are attending conference.
Delivering a keynote speech at the conference, State Secretary of the Ministry of Foreign Affairs of Latvia Andrejs Pildegovics said this event has been organized within the country’s presidency of the Council of the EU.

“This is the first conference being held in this format. It is aimed at expanding the friendship among partner countries. Journalists play a great role in the development of this project,” he added.

High-level representatives include Christian Danielsson, Director-General of Directorate-General for Neighborhood and Enlargement Negotiations (DG NEAR) at the European Commission, Nils Muižnieks, Council of Europe Commissioner for Human Rights, Dunja Mijatović, OSCE Representative on Freedom of the Media, Vaira Vīķe-Freiberga.