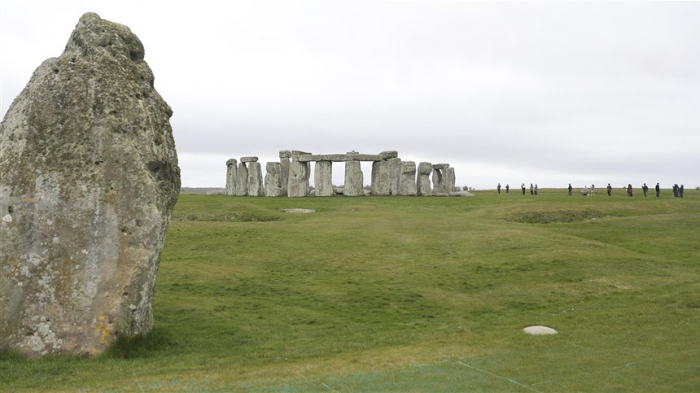 The large 'sarsen' stones are believed to be originated 15 miles to the north of the prehistoric circle, which is a World Heritage Site, say the researchers, AzVision.az reports ciitng the NBC news.

For thousands of years, Britain's Stonehenge has held tight to many of its secrets.

Now, scientists say in a study published Wednesday they have uncovered one: The origin of many of the stones that make up the mysterious prehistoric stone circle thought to date from 2,500 BC.

Dr. Jake Ciborowski — part of the research team — analyzing one of the 52 sarsen stones at Stonehenge using a portable x-ray fluorescence spectrometer.David Nash
The monument — erected during the late Neolithic period — is a popular tourist attraction in southern England and one of the country’s most famous sights. But despite its popularity, much is still not known about the UNESCO World Heritage Site.

Researchers from the University of Brighton analyzed the 52 large stones — known as sarsens — that make up the main circle and inner horseshoe of the monument, and concluded that all but two shared a common origin. The scientists then compared the core of one of the sarsens — drilled in 1958 during conservation work — with data on sarsens from around the United Kingdom and determined that they originated about 15 miles to the north in West Woods, Wiltshire.

The research — released in the journal Science Advances — was only made possible after the core was returned to the U.K. from Florida by a representative of the company that carried out the work over 60 years ago.

“Archaeologists and geologists have been debating where the sarsen stones used to build Stonehenge came from for more than four centuries,” lead researcher David Nash, a professor of physical geography at the University of Brighton, said.

“This significant new data will help explain more of how the monument was constructed and, perhaps, offer insights into the routes by which the 20- to 30-ton stones were transported,” he added.

Scientists have been trying to unlock the mysteries of Stonehenge since the Middle Ages, with the first known excavation at the site taking place in the 1620s. In 2015, researchers concluded that the smaller stones that make up the monument — known as bluestones — were quarried a remarkable 180 miles away in western Wales.

Although one fewer question now remains, experts are still unsure who built and used Stonehenge, and why they chose to locate it where they did.

“This research provides a fantastic leap forward in our knowledge about Stonehenge, as we can finally answer the question of where the iconic sarsen stones were brought from,” said Susan Greaney, a senior historian at English Heritage, the charity which looks after Stonehenge.

She added that the return of the core from Florida was crucial, as it allowed the researchers to undertake a “small amount of destructive sampling.”

But despite the research team discovering the origin of 50 of the 52 sarsen stones, the ancient wonder continues to hold the secret of the other two.

“We still don’t know where two of the 52 remaining sarsens at the monument came from,” Nash said.

“There remain mysteries to solve.”