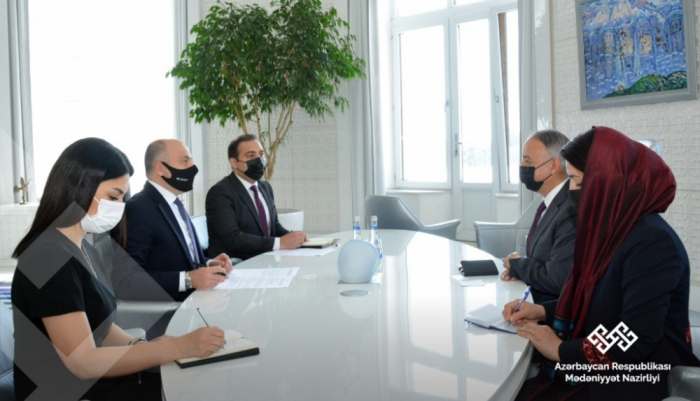 Azerbaijan’s Ministry of Culture Anar Karimov has met with the Afghan ambassador to the country Amanullah Jayhoon to discuss the expansion of cultural cooperation between the two countries.

The minister said the people of Azerbaijan and Afghanistan were bound up by the common historical and cultural values. He hailed Azerbaijan-Afghanistan relations, including cooperation in the field of culture.

The minister also thanked Ambassador Jayhoon and the Afghan state for supporting Azerbaijan’s just cause during the Patriotic War, as well as adopting resolutions, recognizing Azerbaijan’s sovereignty and territorial integrity.

Congratulating Azerbaijan on the victory in the Patriotic War, the ambassador said that Afghanistan would always stand by its brotherly nation.

Touching upon his visit to the liberated territories, Jayhoon said that he was horrified by Armenia`s vandalism and the scale of destruction he saw in Fuzuli district.

They also exchanged views on cultural cooperation, including museum studies, launching the national corners at the National Libraries of both countries, as well as organizing joint exhibitions and events to mark the 880th anniversary of Azerbaijani great poet and thinker Nizami Ganjavi.