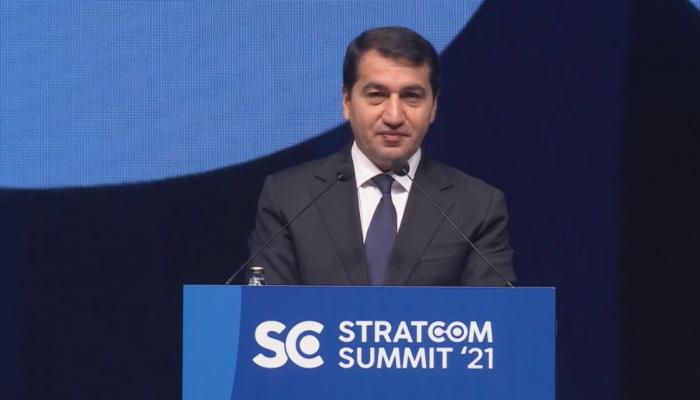 Despite the difficult war, Azerbaijan was able to convey the truth to the world, Assistant to the President of Azerbaijan - Head of the Foreign Policy Department of the Presidential Administration Hikmet Hajiyev said at the opening of the International Strategic Communication Summit (Stratcom Summit’ 21) held in Istanbul, AzVision.az reports.

"As it’s known, on September 27 last year, Armenia unleashed a new war against Azerbaijan, our civilians, and the Azerbaijani people began their just struggle. The proper formation and conduct of strategic communication in this matter was one of our most important goals, as Armenia continued its provocations based on hybrid and psychological war," Hajiyev noted. "Many doors in the world media continued to remain closed for Azerbaijan. The information monopoly in the world media posed obstacles which we had to overcome. In this context, the struggle that was waged by President Ilham Aliyev through establishing direct contacts with the world media should be emphasized."

"For 44 days [of the second Karabakh war], the president almost daily was giving long-hour interviews to more than 30 leading, most authoritative TV channels, media agencies of the world," he added.