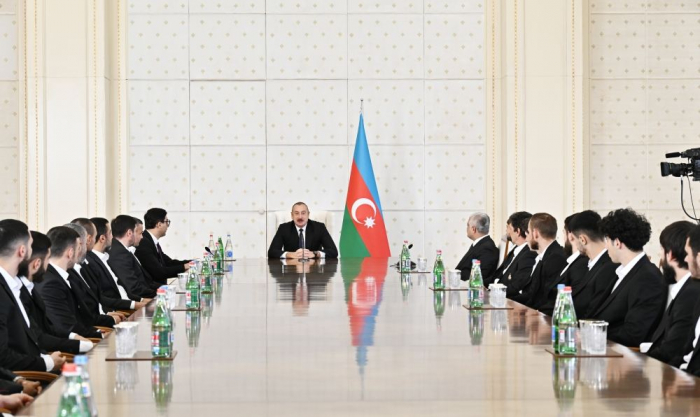 The whole world can no longer say a word about our Victory, President of the Republic of Azerbaijan Ilham Aliyev said receiving members of Qarabag football club which reached the playoffs of the UEFA Conference League, AzVision.az reports.

“You have seen what the city of Aghdam is like today. The whole world can see it now. Thousands of people – politicians, MPs, public figures, journalists, foreigners – have already visited Aghdam and seen the destruction. More than a year has passed since the war ended. But did a European organization say a word about this tragedy, this disaster, this fascism? No! They are ignoring it as if it never happened. The city of Aghdam does not exist now, it has been completely destroyed, looted and mined everywhere," the president said.

"Since the war ended, we have lost about 200 people, or they have been disabled. But did a European organization condemn Armenia for this tragedy? No! Has a European organization condemned Armenia for ethnic cleansing and the Khojaly genocide during the occupation? No! This is the truth, this is the reality, and, of course, we must take this reality into account, but we must never come to terms with it. Just as we did not come to terms with the occupation, we did not come to terms with this injustice. We gathered strength and struck such a blow to the enemy that the whole world can no longer say a word about our Victory," he said.

"The whole world had to accept our historic Victory. Because there is no other way. Why? Strength, resolve, unity, solidarity and responsibility. In politics, life and sports, I think these factors will bring dignity to every person, every politician. I want to say again that your victory is not just a sports victory. Because you represent the city of Aghdam. I am sure that one day we will build Aghdam as I said so that Aghdam will be an example to the whole world, and you will play your home games in Aghdam, at the Imarat Stadium, where you will achieve bright victories and make our people happy,” the head of state said.