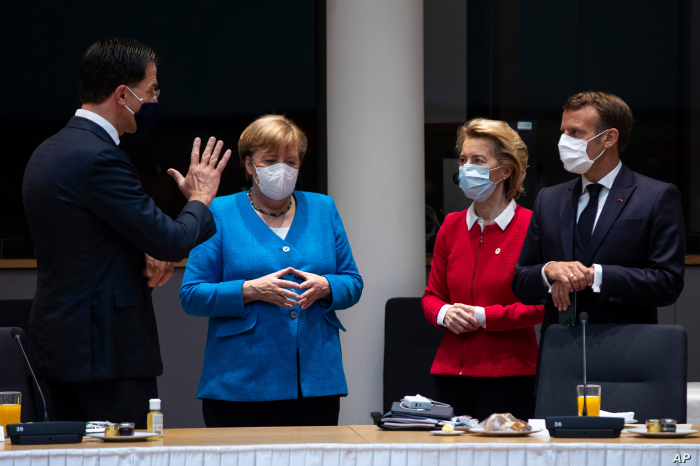 European Union leaders have agreed to hold video conferences almost on a weekly basis to coordinate national measures against the COVID-19 pandemic, as the continent battles a spike in infections, AzVision.az reports citing Reuters.

Video-conferences are less effective for reaching complex compromises, diplomats say, though they are more practical at present than in-person meetings that increase the risks of infection among leaders and their staff.

Underlining those risks, the head of the European Commission and the Finnish prime minister have had to leave a two-day EU summit that ends on Friday as a COVID-19 precaution.

“There was an agreement that we would, almost weekly now, engage in consultation with each other in terms of best methods and the best approaches to deal with this second wave of the spread of COVID-19,” Irish Prime Minister Micheal Martin said at the summit on Friday.

The EU’s 27 nations fought COVID-19 with different, sometimes contrasting measures, in the first months of the pandemic. The tighter coordination is expected to avoid a repetition of divisions seen after the first outbreaks.

A certain degree of coordination has emerged in recent weeks and months on some issues, such as vaccine procurement and common non-binding criteria to assess the gravity of the epidemic at national level.

Quarantine length for those who had been in contact with people who were ill was 14 days across the bloc until a few weeks ago, when many countries began shortening it while others stuck to the global standard.

The decision on regular video-conferences was taken late on Thursday after EU Commission President Ursula von der Leyen had to quit the leaders’ summit abruptly and go into precautionary quarantine after coming into contact with an infected person..

Finnish Prime Minister Marin Sanna also had to leave the meeting on Friday to self-isolate.

“I left the European Council meeting as a precautionary measure and asked the Swedish Prime Minister Stefan Lofven to represent Finland at the meeting,” she said on Twitter.

Poland’s Prime Minister Mateusz Morawiecki did not attend the meeting as he is also in quarantine since Tuesday after meeting a person who tested positive for the virus.