Living in Azerbaijan as a Jew versus being Jewish in Armenia 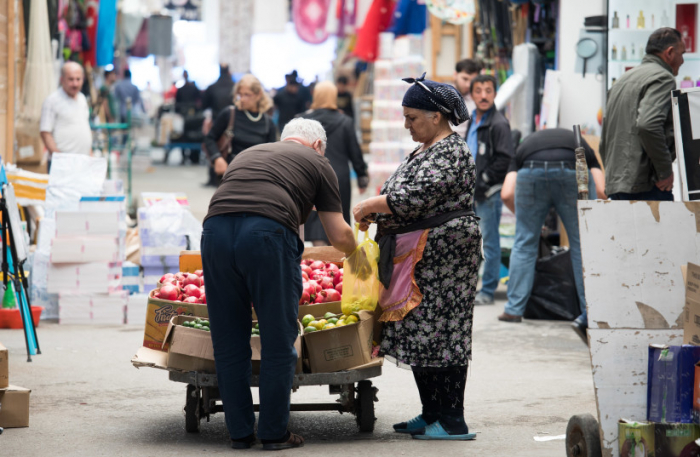 Street life at a bazar in Baku, the capital of Azerbaijan. October 14, 2019. (photo credit: NATI SHOHAT/FLASH90)

It is a well-known fact that there was virtually no antisemitism in Azerbaijan.

My family has lived in Baku since the beginning of the last century. How did the Baku Jews live? Why do they remember their city so warmly? Because the Jews there were never outcasts.

You will find “Jewish” memorial plaques and monuments in Baku. They are dedicated to the genius physicist Lev Landau; to the leader of the Soviet atomic program, three-star Gen. Boris Vannikov; and to other famous scientists. There is a beautiful monument in Baku dedicated to a tank commander, the National Hero of Azerbaijan Albert Agarunov, who died in 1992 in a battle in Karabakh. A street where this monument is located and a school where Albert studied are also named after him. At Agarunov’s funeral, at the request of the family, both a rabbi and a mullah read prayers. I have named only a few tributes to Jewish citizens of Baku. There are many more.

It is a well-known fact that there was virtually no antisemitism in Azerbaijan. We grew up together, respecting each other, our different religions and traditions.

It is important to note that Azerbaijan is a loyal strategic partner of Israel. We get energy products that are vital for Israel’s development from Azerbaijan. We have established cooperation in different fields, and thanks to the assistance of Azerbaijan, the Mossad has been able to carry out many operations against Israel’s enemies.

Incitement to conflict, hatred, blood and suffering came to Azerbaijan from outside. During the years of perestroika, ideologues of “Great Armenia from sea to sea” took advantage of the weakness of the central government and the collapse of once great state, and began to implement their plan.

Hundreds of thousands of Azerbaijanis living in Armenia were expelled from their plundered homes. They often went to Azerbaijan barefoot, through the mountain passes, with children in their arms. In Nagorno-Karabakh, the Armenians also expelled all their Azeri neighbors who had lived there for generations, declaring that this land was Armenian and that everyone else had no business being there. Thus, Armenia’s aggression against Azerbaijan, war and occupation began.

Moscow did not know what to do, and probably did not care to extinguish the flaring conflict. To stir up the Karabakh conflict, Soviet Army tanks were brought into Baku in “Black January.” Soviet troops violently suppressed public opposition to this aggression, shooting unarmed civilians who were peacefully protesting in the streets. The acts of vandalism even included tanks crushing ambulances. Those days heralded the end to the Soviet Azerbaijan.

WE LIVE in a modern world and have to reckon with its realities. There are international laws and recognized boundaries that the international community is obliged to respect. There are people who lived peacefully on this land. Armenia attacked the neighboring independent state of Azerbaijan and occupied 20% of its territory, having seized both Karabakh and seven adjacent regions.

Who benefited from this war in 1994? Only politicians who amassed multimillion-dollar fortunes by fueling the conflict. Many of them live far from the Caucasus. And the aggression brought the Armenian people nothing but misfortune, devastation and isolation.

What is the attitude toward Jews in Armenia?

Fern Sidman of The Jewish Voice in New York wrote an article titled “Armenian antisemitism rears its ugly head again.” In is she says, “In a key symptom inherent in oppressed, closed and wholly mono-ethnic societies, Armenia is cited as the least tolerant toward Jews among 18 countries in Central and Eastern Europe in data published by the Pew Research Center. Fully 32% of Armenian survey respondents said they would not even accept Jews as fellow citizens. That figure is jarring, but actually, not surprising.”

According to the Index of Antisemitism of the Anti-Defamation League, Armenia is the most saturated with antisemitism among the post-Soviet countries, with anti-Jewish sentiments shared by 58% of its population.

“The typical official response to antisemitism in Armenia is to deny its existence,” Sidman wrote. The Holocaust memorial in Armenia’s capital of Yerevan was vandalized multiple times in 2004 and 2005, but police reportedly concluded that the monument “had just fallen on its own,” and no officials publicly condemned the incidents.

It is important to note that the closest ally of Armenia in today’s conflict is Iran, a country that openly declares its desire to destroy the Jewish state, and which is a major sponsor of world terrorism.

More than that, American Rabbi Israel Baruk wrote about the coordinated action of the Armenian student organizations of the United States. He wrote on The Times of Israel website about campaigns in various universities in the country to boycott, and refuse to cooperate with Israel.

“Violent prejudice against Jews and deeply antisemitic action in Armenia is a long-term crisis,” Baruk wrote, “despite an absolute lack of public awareness to this fact, particularly in the United States. It is practically unknown to most that Armenian antisemitism played a weighty role in Hitler’s ‘Final Solution,’ specifically when 20,000 Armenian Nazi collaborators lent a hand by rounding up Jews and other ‘undesirables’ behind the German Army.”

The leaders of those collaborators were Gen. Dro and Gen. Njdeh, both of whom are hailed as national heroes in Armenia today. Moreover, in the 1930s, the Armenian-American media outlets, such as Hairenik, gave its full propaganda support to Hitler, calling Jews “poisonous elements,” justifying the Holocaust and naming it a necessary “surgical operation.”

In the center of Yerevan, a monument now stands to Nzhdeh, considered a national hero.

“The numbers don’t lie,” concludes Sidman. “Armenian antisemitism is a serious problem, and the issue must not be denied, whitewashed or ignored.”
What do we see from Israel today?

On the one hand, there is Azerbaijan, where we never had any significant antisemitism; that supplies Israel’s vital energy needs; that helps Israel fight its enemies in the region; and that today is fighting on its sovereign territory to drive out the invaders.

On the other hand, there is Armenia, a country that has built a strong strategic alliance with Iran; that celebrates Nazi corroborators as national heroes; that has the highest level of antisemitism in Europe; that illegally seized and occupied the territory of a neighboring state; and that is shelling civilian targets to provoke a larger-scale conflict.

These are the two sides of one front.

Roman Gurevich is a political analyst.