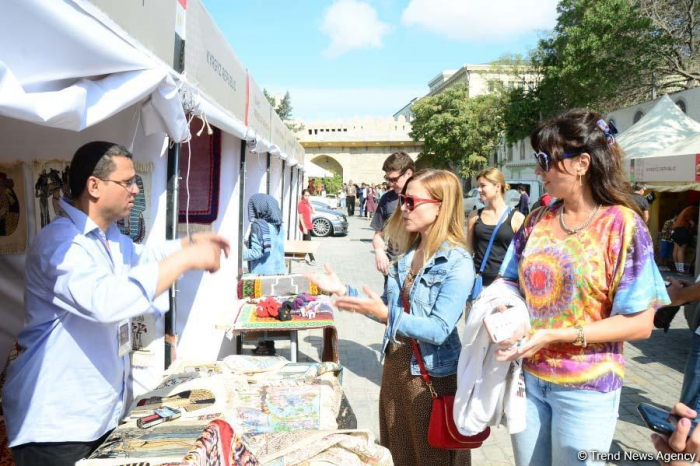 The second grandiose Nasimi Festival of Poetry, Art and Spirituality is being held in Azerbaijan from September 28 to October 1 with the organizational support of the Heydar Aliyev Foundation and Azerbaijan’s Ministry of Culture, Trend reports.

The festival is aimed at exploring and promoting the creativity of brilliant Azerbaijani poet and thinker Imadaddin Nasimi (1369-1417), as well as exploring his thoughts and ideas in modern life. The festival was held for the first time in 2018. The current festival has coincided with the 650th anniversary of Nasimi.

According to Azerbaijani President Ilham Aliyev’s decree, 2019 was declared the Year of Nasimi.

As part of a series of events with the joint organization of the Office of the Icherisheher State Historical and Architectural Reserve and the Research Center for Islamic History, Art and Culture (IRCICA), the 1st Baku International Traditional Craftsmanship Festival “Folk Art” took place on Sept. 28.

The opening ceremony was attended by the Board Chairman of the Icherisheher State Historical and Architectural Reserve Asgar Alakbarov, the Chairman of the Caucasus Muslims Office Sheikhulislam Allahshukur Pashazade, the Minister of Culture of Azerbaijan Abulfas Garayev, the IRCICA Director General Halit Eren.

The leitmotif of their speeches at the opening ceremony of the festival was the idea that the Baku Festival promotes the revival of a rich and diverse Islamic culture, preserving its traditions.

At the festival, the material and cultural heritage of Islam is presented not only in the artistic format, but also in the scientific field. For this, the first Baku International Congress "Prospects for the Development of Arts and Crafts of the Islamic World" will be held with the participation of public and government figures, representatives of NGOs, scientists, craftsmen and experts on 14 different topics, including textiles, carpet weaving, kalagai, jewelry, carving art, etc.

One of the main goals of the project is to attract the attention of the participating countries to the rich history of Azerbaijani art, to popularize the cultural and spiritual heritage of the Azerbaijani people in the world.

About 30 events will be held as part of the festival in Baku, as well as in Shamakhi, where the poet was born. The festival promises to be remembered for a number of innovations, interesting projects, presentations, compositions, performances.

The program of the Nasimi Festival can be found here.