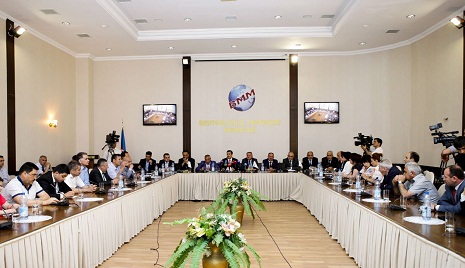 The Civil Society Coalition “Support for the Baku 2015 first European Games” held a round table on “Double-standard approach of international organizations toward human rights” on June 6.

Delivering an opening speech at the event, Rufiz Gonagov, the coordinator of the Civil Society Coalition, chairman of the International Relations Research Center, said certain circles, which have an unfriendly attitude toward the relations with Azerbaijan, have already begun to express their concerns over the country as first European Games - the grandeur event of a global scale - is approaching.

Aydin Aliyev, the coordinator of the Civil Society Coalition, editor-in-chief of “Baku-xeber” newspaper, said in his speech that the European Parliament is due to hold hearings on the upcoming European Games and human rights situation on June 10.

“The article, co-written by UN Special Rapporteur on the situation of human rights defenders Michel Forst, OSCE Representative on Freedom of the Media Dunja Mijatović and Council of Europe Commissioner for Human Rights Nils Muižnieks, claims that representatives of international organizations and foreign human rights defenders undergo pressure in Azerbaijan as well. It is a groundless article which indicates double-standard approach of certain circles toward Azerbaijan as it is doing its utmost to hold the major sports event successfully,” Aliyev added.

Rauf Zeyni, the head of National NGOs Forum, said actions of anti-Azerbaijani circles pose a threat to the country’s independence, noting that as the Azerbaijani president stated, Azerbaijan will never give up its independence.

Alimammad Nuriyev, the chairman of the Center for Constitutional Studies, said the circles directed from a single center have already begun to take insidious actions as their attempts fail.

“I don’t remember such a statement was issued when people were shot during the Armenian parliamentary elections on February 19, two were shot dead on the eve of the elections in Georgia in 2011 and even after two Azerbaijanis were taken hostage by Armenians. However, these circles, including these three authors began to issue such a statement on the eve of the European Games,” he noted.

Vugar Rahimzade, the chief editor of “Iki sahil” newspaper, said these circles continue to demonstrate double-standard approach toward the negotiations on the settlement of the Nagorno-Karabakh conflict, Azerbaijan’s most painful problem.

“Some countries try to secure their own interests in Azerbaijan by putting pressure on the country through the UN, OSCE and the Council of Europe. Behind the veil of democracy, people are being killed in the Middle East. We need to adopt a statement against such international organizations to put an end to double standards toward Azerbaijan,” he added.

Politician Elman Nasirov said these circles changed the direction of pressure when they saw that Azerbaijan is fully ready to host the first European Games.

“The article co-written by the UN, OSCE and Council of Europe representatives is aimed against Azerbaijan’s policy. This pressure will continue after European Games,” he noted.

Hikmat Babaoglu, the editor chief of “Yeni Azerbaijan” newspaper, regarded the joint statement of the representatives of the three international organizations as an attempt to unite their pressure due to the increasing power of Azerbaijan.

At the end of the event, a statement was adopted on the behalf of civil society institutions and media outlets.