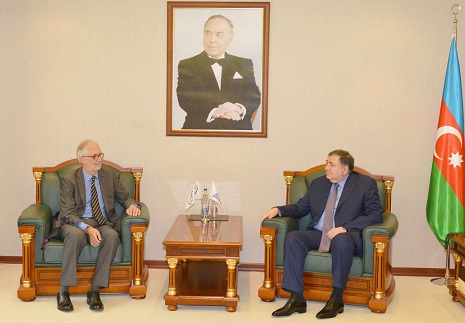 The level of training of Azerbaijani cyclists is high, the International Cycling Union president Brian Cookson said June 12 at the meeting with the minister of taxes, first-grade state tax adviser, the president of the Cycling Federation of Azerbaijan Fazil Mammadov, the message of the Federation reported June 12.

Brian Cookson is on a visit to Azerbaijan in order to attend the opening ceremony of the first European Games Baku 2015.

He said that cycling has been developing rapidly in the country in recent years.

Cookson said that more than 300 athletes will participate in the cycling events at the first European Games and they will all get a chance to score points for the license to take part in the Olympic Games in Brazil in 2016.

Despite the fact that Azerbaijan is a young country, which joined the International Cycling Union, cycling is developing rapidly here, he said.

“The level of training of Azerbaijani cyclists is high,” said Cookson.

Issues for holding the BMX World Championship in 2018 in Azerbaijan were also discussed at the meeting.

Baku 2015 is the first-ever European Games, an exciting and innovative multi-sport event for the continent that began June 12 and will last until June 28, 2015.

Baku was awarded the games by the European Olympic Committees (EOC) in December 2012.